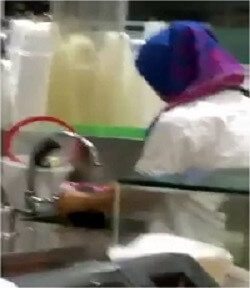 IN a short clip of what appears to be the desserts and fruits stall at Kopitiam at the National University of Singapore (NUH), a staff member of the stall is seen washing her shoes with a brush in the basin which presumably is for washing dishes or vegetables and fruits.

After scrubbing her shoes, the staff member later placed the brush back in a plastic holder together with some knives.

Ms “Queenie Here”, who posted the video on her Facebook page, said she had wanted to order some dessert after her dinner on Sunday, 21 June.

“Unfortunately I saw this scene,” she said.

In the video, the lady who filmed the act, was incredulous that such a thing was happening.

At one point, the staff member apparently looked at the lady filming the act, but carried on anyway and removed her second shoe to wash in the basin.

“Oh! She’s washing her shoes,” the lady said. “Wah, she seems to enjoy washing it, you see. I want to see where she is going to pplace the brush.”

Upon seeing the staff member putting the brush back in the plastic holder, the lady said, “And then she put back the brush! There, in that box! The white colour box. Don’t ever eat [here]!”

The Online Citizen (TOC) will be writing to Kopitiam to enquire further on the incident.