The Yong Xing Coffee Shop in Block 155, Bukit Batok Street 11, has broken the record for the highest price paid for such an establishment.

At a whopping $31 million, it dwarves the last record of $23.8 million set in 2013 by the Coffee Express 2000, a coffee shop in Hougang Avenue 4 which is owned by the Broadway Group.

It was reported by the Chinese newspaper, Lianhe Wanbao, that the Bukit Batok deal was finalised last month.

The company is believed to be set up by the brother of Mr Ricky Kok Kuan Hwa, the founder of coffee shop operator Chang Cheng Group, which owns the Chang Cheng Mee Wah chain of coffee shops, according to a Straits Times report. 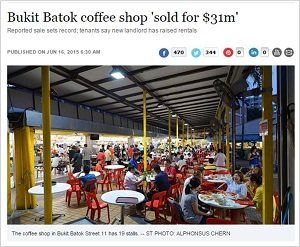 The previous owner has apparently reaped a fortune, having bought the coffee shop nearly 20 years ago for a mere $3.38 million then.

Patrons of the coffee shop, which has 19 stalls, said one reason why it has fetched such a phenomenal price tag is because of the lack of similar outlets, such as a hawker centre, in the area.

The nearest shopping mall, for example, is West Mall, which is a 15-minute walk away.

However, there is also a downside to the deal – stall owners said their rent has been increased by at least 10 per cent, while others said it has doubled.

It is believed that the average monthly rental of the stalls is $5,000.

Some stalls are reported to have increased the prices of their food, while others have extended their operating hours to stay afloat.

“Mr Neo, an owner of a stall selling kway chap and pig intestines soup at the Bt Batok coffee shop said, after the change of ownership, that the rent for his half-stall went up about 10% to $6,500 per month. Haplessly he told the reporter that, in order to survive, he has to work 14 hours daily by extending his business hours from 7am to 7pm, to 7am to 9pm, to cover the increase in rent.

“Ms Lee Fong Ying, 30, a stall-owner selling ngoh hiang said business is alright, but with the increase in rent, she has increased the price of all the items by 10 cents.”

Following the then record price for the Hougang coffee shop, Member of Parliament, Foo Mee Har, asked the Ministry of National Development (MND), what safeguards there are moderate potential rental increases for HDB coffee shop tenants.

“Whether (they are) sold or rental eating houses, the rents of individual stalls are negotiated between the eating house operators and the stallholders … These are business decisions in which HDB does not intervene.” 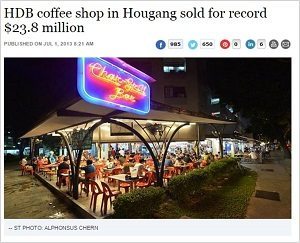 It said then that it will “closely monitor” the commercial property market and intervene if necessary to “prevent speculation and excessive price increases”.

An article in the Straits Times at the time cited “people in the property business” on a possible reason for the sky-high price tag of the Hougang coffee shop: “the prospect of capital appreciation of the shop, which means it might sell for an even higher price in future.”

“If those experts are right,” the Straits Times’ Han Fook Kwang wrote, “the buyer was prepared to pay the record price not because it made business sense in the running of a coffee shop, but because it was a good property buy which he could hope to profit from at some later date.”