Getting at Sylvia, desperately 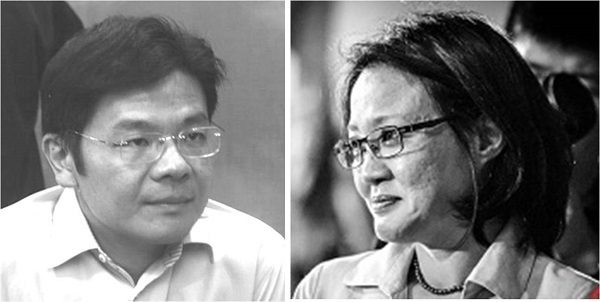 In yet another diatribe against the opposition Workers’ Party (WP) Aljunied-Hougang-Punggol East Town Council (AHPETC), a Government minister has repeated its accusations against the latter.

In a letter to the Straits Times Forum page on Saturday, 13 June, Mr Lawrence Wong, who signed off his letter in his capacity as the Minister for Culture, Community and Youth and the Second Minister for Communications and Information, alleged that AHPETC is guilty of various wrongdoings.

These accusations, however, have been addressed by AHPETC at various points in time, including at a specially-convened two-day Parliamentary sitting in February this year, following the release of the Auditor-General’s report.

Nonetheless, the People’s Action Party (PAP) Government, through its ministers, has lately surfaced another allegation, this time particularly against Ms Sylvia Lim, the chairman of AHPETC and the WP.

She is being accused of “lying” to Parliament about the transfer of Sinking Funds which all town councils are required by law to perform.

Mr Wong’s follow-up on Saturday was in response to this letter by Ms Lim, and he regurgitated the same issues, among which was this:

“First, the letter blandly asserts that AHPETC had done the necessary transfers to the sinking fund up to financial year (FY) 13/14.

“This is precisely what the court took issue with: That Ms Lim had claimed in Parliament that AHPETC had made sinking fund payments for FY14/15, when, in fact, payments were outstanding.”

This seems to be what Law Minister, K Shanmugam, was referring to as well, when he commented on the judge’s decision on the application by the Ministry of National Development for the courts to appoint independent accountants to oversee the use of government grants to AHPETC.

“He said that the chairman of the WP misled Parliament,” Mr Shanmugam said, referring to justice Quentin Loh. “It is very serious to lie in Parliament.”

The allegations that Ms Lim had lied came about after Ms Lim submitted her affidavits in April to the courts for the hearing into the aforesaid MND’s application.

In it, Ms Lim said that AHPETC had made two quarterly transfers into its Sinking Fund, instead of four transfers, for the Financial Year 2014/15.

This runs counter to what Ms Lim had told Parliament in February, the ministers apparently are claiming.

Nonetheless, AHPETC has refuted the suggestion that Ms Lim had lied to Parliament.

“Ms Sylvia Lim denies that she lied to Parliament.  Parliament has avenues such as the Committee of Privileges to ensure that MPs’ conduct meets the standards expected.

“Just because AHPETC did not physically transfer monies into Sinking Funds from its Operating Funds does not mean that monies are missing.  Up to Financial Year 13/14, AHPETC has done the necessary transfers.” (“Response to Minister Lawrence Wong’s Opinion Piece”)

But what exactly did Ms Lim say in Parliament which is seemingly so contentious?

Ms Lim was explaining what AHPETC had done up till that point, in terms of its finances.

This is the part of her speech which the ministers seem to be taking issue with:

“The Town Council accepts that it should have transferred the full amounts due to the sinking funds each quarter and should have paid sinking fund expenses directly from the sinking fund accounts. We have taken steps and made good the transfers. For FY2011 and FY2012, the necessary transfers have been done. We have also done the transfers for FY2013 and have been making transfers for FY2014. As for the errors in transfer amounts flagged by the AGO, we have also made the corrections and payments.” [Emphasis added.]

The relevant part to note is this:

“We have taken steps and made good the transfers…. We …have been making transfers for FY2014.”

Now, let’s look again at what Mr Wong wrote in his Straits Times letter on Saturday:

“… Ms Lim had claimed in Parliament that AHPETC had made sinking fund payments for FY14/15, when, in fact, payments were outstanding.”

First, it is true that AHPETC had made sinking funds payments for FY14/15. This clearly is not in dispute.

Second, Mr Wong’s use of the word “payments” – in plural form – is misleading.

At the time when Ms Lim made these remarks in Parliament (February), AHPETC had only one Sinking Fund transfer outstanding, or due, for FY14/15.

And because the MND has since withheld further provisions of government grants to AHPETC, to the tune of a substantial S$14 million, the latter has been unable to transfer further funds into its Sinking Funds.

So, AHPETC has, in fact, made good on all the transfers into the Sinking Fund – except the last 2 quarters of 2014, as explained above.

As for the allegation that Ms Lim had lied to Parliament, this seems to be a rather pedantic argument over semantics.

As Ms Lim’s remarks in Parliamentary records show, she was explaining that AHPETC was righting some shortcomings highlighted by the AGO report, and that AHPETC “have been making transfers for FY2014”, which is entirely true – AHPETC “have been making transfer” and had, at the time, made two transfers to its Sinking Fund, and would continue to make these transfers if the MND released its grants to the town council.

Unfortunately, the MND had decided to withhold these grants, which has now led to AHPETC being unable to make further transfers to its Sinking Fund.

From Ms Lim’s remarks, it is clear that she was talking about an ongoing endeavour – AHPETC continuing to make transfers at the period of time when she was speaking in Parliament, and presumably that it will continue to do so if MND released the grants to it.

Indeed, in her correspondence with the MND Ms Lim had repeatedly highlighted that AHPETC would not be able to comply with its legal obligations if the MND did not release the grants.

So, it is rather an exaggeration to say that she lied.

And in any case, as the AHPETC had said, the government is free to summon her before a parliamentary Committee of Privileges.

In the meantime, such allegations look like nothing more than a desperate attempt to get at the WP chairman.

While all these accusations are being hurled, residents and Singaporeans wonder why the MND is unable to resolve such matters without having to resort to the courts and using taxpayers’ funds to settle these matters, or indeed having to resort to immature and unproductive politicking and name-calling.