Tan Sri Syed Hamid Albar was Malaysia’s foreign minister between 1999 and 2008, and was engaged in key initiatives to transform and integrate ASEAN. He initiated the inaugural ASEAN civil society conference in 2005.

“We cannot allow our region to be bogged down with problems that are prolonged or intensified by the blanket application of non-interference,” he said, while delivering the keynote address at the welcome dinner of the ASEAN Peoples’ Forum (APF) 2015 in Wisma MCA yesterday on 22 April.

The APF is the largest annual gathering of civil society organisations in ASEAN and is organised in conjunction with the ASEAN Summit, where heads of state meet.

Also present at the APF 2015 dinner was Malaysian Chinese Association (MCA) central committee member Datuk Ti Lian Ker. He reaffirmed MCA’s commitment to building a people-centred ASEAN, noting, “Success can be obtained through collaboration—we must listen and come to an agreement on a middle ground.”

Three parallel workshops were held in the morning, with a town hall discussion between civil society and ASEAN parliamentarians held in the afternoon, featuring seven members of parliament from various ASEAN member states.

Activists and parliamentarian alike emphasised the need for ASEAN to heed the people’s interests and not just business and corporate interests. 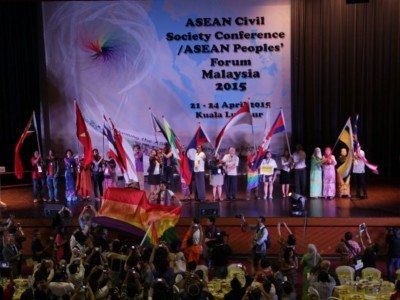