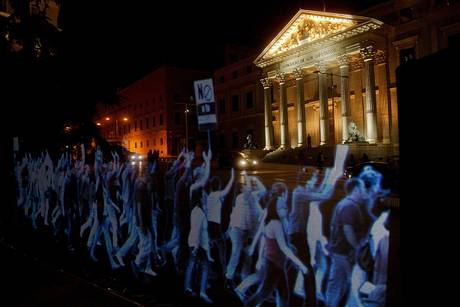 Last December, the Spanish government passed the new Citizens Safety Law which would criminalise public gatherings and protests in front of government buildings which are held without permission from the authorities.

These would include any place from universities to hospitals.

The law will take effect on 1 July this year.

“The law, which one political opponent of the ruling popular party called “the worst cut of rights and freedoms since the Franco regime,” is strongly opposed by the public, with a reported 82% Spanish of citizens (link in Spanish) wanting it repealed,” reports Quartz Global. “Protests followed its initial approval in the lower house in December, and the one this Friday drew almost 18,000 people from all over the world to the streets in Madrid.”

“[Unlike] previous protests, no one was physically there,” Quartz Global said.

“The entire protest—in a powerful and ironic commentary against the law—was carried out by holograms.”

Anyone found guilty of unauthorised demonstrations could be fined up to €600,000. A further fine of €600 will be imposed for disrespecting police officers, and €30,000 for filming or photographing them.

“Organised by the group Holograms for Freedom, ghost-like figures holding placards took aim at the imminent draconian measures, arguing that holographic people are now afforded greater freedoms than their real-life counterparts,” reports The Independent in the United Kingdom.

Activist groups Hologramas por la Liberdad and No Somos Delito (“We are not criminals”), put out a call for people “around the world to participate in the landmark even by simply webcamming their face via the campaign website.”

More than 2,000 virtual images were sent and used in the hour-long hologram demonstration, El Pais reported.

“These aren’t ghosts, this is the world’s first hologram protest,” Greenpeace posted on its Twitter page. A spokesperson for the protest movement said, “With the passing of the Gag Law, you won’t be allowed to assemble in public spaces without risking a fine.

“Ultimately, if you are a person, you won’t be allowed to express yourself freely. You will only be able to do it if you are a hologram.”

Video of the protest: