On 30 March, a resident who apparently lives in Aljunied GRC posted online that he owes the town council of his estate “4+ months” worth of service and conservancy charges.

“Funny, I had stopped paying them for 4+ months. After the 2nd, they sent me a red letter. Thereafter, no news from them.”

When a fellow commenter on the page chided him for dishonouring the memory of the late Lee Kuan Yew by not paying his bills, Mr Seetoh said:

“In honor of his memory, I’ll hold back the vulgarities on you for the time being.”

On Wednesday, the matter as brought to the attention of the Singapore Police Force (SPF) by a member of the public.

Mr Patrick Mahoney, posting on the SPF Facebook page, asked if it was against the law for Mr Seetoh to not pay his S&C bills.

“Is what this guy K Y Seetoh did legal, or is it a crime?” Mr Mahoney wrote. “He is a resident of Aljunied GRC, and he refused to pay his S&CC charges for 4 months because he didn’t vote for the Workers’ Party. If it is a crime, I want to file a police report against him since it is akin to cheating the town council.”

In its response shortly after, the SPF said that it has informed the Ministry of National Development about the case:

“Hi Patrick, town councils have their own processes for the non-payment of fees. We’ve referred your feedback to the Ministry of National Development for their information.”

It is against the law to refuse to pay one’s bills, including service and conservancy charges.

Mr Seetoh is believed to be a Division Director at real estate firm, Dennis Wee Group.

He had also apparently posted some rather vulgar and obscene comments about activist Han Hui Hui in the past. 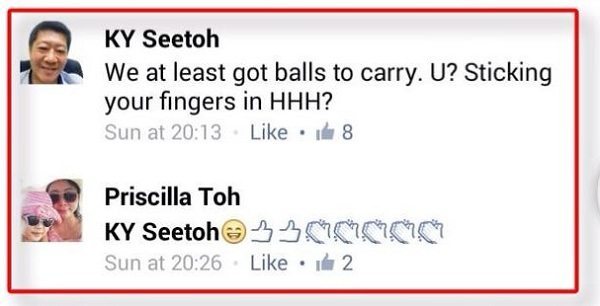 And: “Wealthy PAP supporter proudly brags about not paying S&CC fees to AHPETC and getting away“.