After almost one and a half years since the Government said it was reviewing the complicated taxi fare structure in Singapore, Senior Minister of State for Transport, Josephine Teo, told Parliament on Wednesday that “there was no easy solution to harmonise the fares.”

As such, “the best solution”, she said, “was to leave the fares as they are for now.” In November 2013, Mrs Teo had responded to questions from two Members of Parliament (MP) about the complicated taxi fare structure and if this served commuters’ interest.

MP Liang Eng Hwa had also asked whether commuters are expected to scrutinise the type of taxis which they flag down before deciding to board the taxi.

In her reply then, Mrs Teo said she recognised that “the current taxi fare structure is complex and confusing for commuters.”

“LTA will work with the Public Transport Council (PTC) and the taxi companies to study if and how it could be made simpler and more easily comparable across different taxi companies, taking into consideration also the impact on taxi drivers, ultimately to have a taxi fare structure that best serves commuters’ interests,” she told the House then.

In December 2013, National University of Singapore transport researcher Lee Der Horng also chipped in on “the mind-boggling range of fares.”

In the current system, there are close to 10 different flagdown fares, three different metered fare structures, more than 10 different types of surcharges, eight types of phone booking charges, issued by some 30 types of cabs in at least eight different colours, across seven brands.

“The price mechanism has failed badly in the taxi industry such that it is operating like a perfect competition, whereby whenever one operator increase prices, the others will follow,” Dr Lee said. “If we are talking about luxury goods, it is their freedom to do so. But taxi industry’s position should be somewhere between public and private, so the Government cannot be blind to this.”

The announcement that the Government was reviewing the fare structure had raised the expectations of industry players. 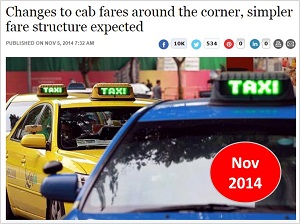 Other changes which were speculated to be in the pipeline, as reported by the Straits Times, were:

The Land Transport Authority (LTA), however, had cautioned against raising hopes of a solution.

“The issue is complicated as the fare structure fundamentally reflects the different rental costs of different taxis. Different stakeholders, ranging from commuters, taxi-drivers to taxi companies, have different interests,” it said. Mrs Teo’s confirmation that the failure to harmonise the taxi fare structure shows perhaps that the complexity of the problem has reached a point where it seems almost impossible to simplify.

For now, commuters will have to live with the complex fares and resign themselves to forking out whatever the meter or the taxi driver says.

Lau Sau Kuen, a marketing professional and regular taxi customer, told the Straits Times in October 2013, reflecting the fatalistic views of many: “It’s terrible we have so many types of cabs and so many different rates. I don’t know the rates any more. Just as I don’t know the different surcharges any more. I’m resigned to paying whatever the cabby tells me to at the end of a ride.”

For just US$7.50 a month, sign up as a subscriber on The Online Citizen Asia (and enjoy ads-free experience on our site) to support our mission to transform TOC into an alternative mainstream press.
Tags: featuredJosephine Teo

Will Josephine Teo continue to fund SMT at S$180m a year after the revelation of SMT “faking” its circulation data?

Tan See Leng: Mrs Teo a very good mentor and provides me with lots of guidance