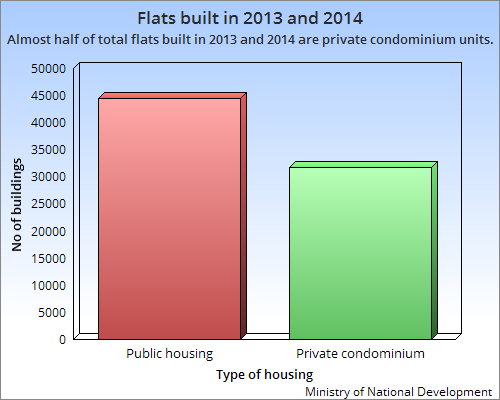 Almost half of total flats built in 2013 and 2014 are private condominium units.

This was revealed by the written reply of Ministry of National Development (MND) to the question of the total number of HDB flats and private condominium units built in 2013 and 2014.

Public housing includes Design, Build and Sell Scheme (DBSS) and Executive Condominium (EC) flats, both of which are sold at a premium price because they are built by private developers.

So it is possible that build-to-order (BTO) flats may even be less that half of the total flat supply. Because BTO flat supply is limited, so they put in place BTO eligibility requirements. For those who exceeded the income ceiling for BTO flats, forking out more than half a million dollars for DBSS and EC (public housing by the way) is the remaining option, or go for private property.

Even BTO is not cheap.

With Singaporeans spending so much on their property, no wonder they are worried about resale value. And the vicious cycle continues. Future generations may even have to borrow from their parents to buy a house, or is that already happening?

On the other hand, in an extreme example, the flat supply cannot be 100% public housing. Otherwise there will be no place for foreigners to stay.

Therefore a fine balance has to be maintained by the MND in order not to run into the problems that are being highlighted here.