New rules for big dorms but MPs concerned about smaller ones While the Ministry of Manpower (MOM) was focused on legislations to regulate foreign workers dormitories which have 1,000 or more workers, Members of Parliament (MPs) were more concerned about the living conditions of those in smaller dormitories.

In Parliament on Tuesday, MOM Minister Tan Chuan-jin was urged to extend the scope of the Foreign Employee Dormitories Bill to include smaller dormitories and other accommodation for these foreign workers.

The Bill, which was being read for the first time in Parliament, will require operators of bigger dormitories “to get a licence which requires them to take steps to control the movement of workers, provide social and recreational facilities and have quarantine plans in place, in case of an infectious disease outbreak, among other requirements”, the Straits Times reported.

Mr Tan explained that the Government is introducing legislations to regulate the bigger purpose-built dormitories because more such dormitories will be constructed in the coming years.

The Government has announced that nine more dormitories will be built in the next two years, which will add a further 100,000 beds to the existing 200,000 beds in the 40 dormitories currently in operation.

According to reports, there are some 770,000 work permit holders in Singapore, excluding domestic maids who live-in with employers.

About half of these, according to news reports, do not need dormitories because they either commute between Singapore and Malaysia, or live in HDB flats or quarters in private estates.

The remainders are in sectors such as construction and marine who need dorms to live in.

MPs were thus more interested in the immediate situation these workers are in, given that some of them are housed in deplorable and makeshift dormitories across the island.

Altogether 11 MPs spoke in the debate in Parliament on Tuesday, and raised concerns over recent media reports of the atrocious living conditions of foreign workers.

Workers’ Party MP for Aljunied GRC, Pritam Singh, suggested that the Bill included “a separate category or categories of licencing for premises that operate as smaller foreign employee accommodation below the threshold number, so as to bring many more dormitories and places of accommodation for foreign workers under a licencing framework.”

He also suggested that some dormitories should be run by the Government, to lend support to small and medium enterprises who might find the costs of putting their workers up at purpose-built dormitories expensive.

“The entry of the Government into this sector can be modelled along the entry of Ministry of Education into the kindergarten business, which is to provide good pre-school education and more importantly, to catalyse improvements in this sector,” Mr Singh explained. “If deemed appropriate, a fraction of the foreign worker levy can be used to establish such dormitories with a subsidy for small companies that show real and sustained productivity improvement in their operations.”

Mr Yeo Guat Kwang (Ang Mo Kio GRC), cautioned that the government should not adopt a “double-standards” policy whereby larger dormitories are subjected to more stringent rules than smaller ones. This, he says, may result in standards in these smaller ones to slide.

Other MPs highlighted that conditions at smaller dormitories tend to be worse.

Mr Singh raised recent incidences where foreign workers not only had to put up with crowded conditions but who had also lost their lives when disaster struck in these dormitories.

He recalled recent news reports of how, for example, on 6 December 2014, “four Malaysian foreign workers who were employed as cleaners died in a fire at a Geylang Lorong 4 shophouse, in Singapore’s worst fire in 10 years.” 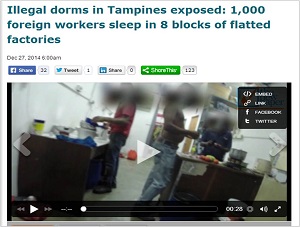 “The Malaysian Star newspaper, STOMP and a Today article reported that premises was occupied by some 100 foreigners from China, India, Bangladesh and Malaysia, partitioned into 11 units of rooms each occupied by about 10 people,” Mr Singh told the House.

He also raised the incident which was reported by the New Paper on 29 December that eight blocks of HDB managed flatted factories at Tampines Industrial Park A, comprising of workshops, furniture manufacturers and warehouses – were operating as “secret dormitory” for 1000 foreign workers, in clear violation of HDB rules.

“On 21 November 2014, the Straits Times reported that a spot check by the Migrant Workers’ Centre found more than 50 construction workers from Bangladesh and India crammed in two small apartments in Selegie Road with the report adding that the ‘men slept shoulder to shoulder, amid rotting food and soiled clothes’,” Mr Singh said. There were also “several reports on unhygienic and overcrowded foreign worker housing” including “an incident of a Punggol HDB construction site where hundreds of workers had to use choked and broken urinals.”

Another press report covered the plight of about 5000 workers living at Tuas View Square “in factory-converted dormitories infested with rats and mosquitos.”

Mr Singh said that while foreign workers stay in a variety of places, including temporary housing at construction sites,  these are “all unregulated by an omnibus act of parliament.”

And this, he added, is “notwithstanding the spaghetti bowl of guidelines and restrictions governing such accommodation from the Urban Redevelopment Authority (URA), Singapore Civil Defence Force (SCDF), Public Utilities Board (PUB), the Building and Construction Agency (BCA), National Environment Agency (NEA) and the Housing and Development Board (HDB).”

According to a Straits Times report last August, it said that “overcrowding is common, where bosses cram in more workers than the stipulated maximum.”

“There are too many makeshift shelters for government officials to conduct checks,” the newspaper said.

And in another report in November on the lack of proper dormitory space for foreign workers, the Straits Times said there are “tens of thousands of workers who continue to live in deplorable conditions” in makeshift dormitories.

However, Mr Tan told Parliament that while he acknowledged “the anecdotal examples of poor living conditions”, he “stressed that this does not mean the situation is dire across the board,” the Straits Times reported.

“I think it is important for the House not to have the wrong impression that there is widespread mistreatment of foreign workers,” Mr Tan said. In the meantime, no arrests have been made with regards to the deaths of the four foreign workers in a fire in a dormitory in Geylang on 6 December.

The police had said that it was investigating the incident.

New rules for big dorms but MPs concerned about smaller ones