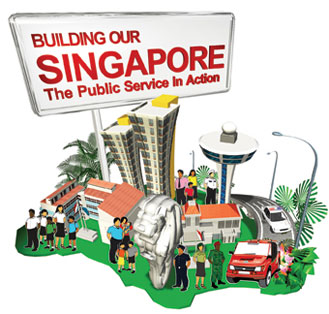 Chew Thiam Kwee and Victor Lye are both public servants.

One is a senior manager with the National Parks Board (Nparks), the other the chairman of a Citizens Consultative Committee (CCC).

They are also both members of the People’s Action Party (PAP) and both hold office positions in the party.

What does this mean for the Public Service’s ethos of political neutrality and impartiality?

Why is this important?

Well, because it has often been said that public servants and the Public Service, and especially the Civil Service, are supposed to be politically neutral.

Mr Chew’s political appointment came to light when the controversy over the Chinese temple/columbarium in Fernvale hit the news last week.

The MP of the SMC is Lam Pin Min, who is also the PAP Branch Chairman there.

Here is a screenshot of the PAP Sengkang West website: How significant, really, is the position of Branch Secretary?

“The second highest appointment in the constituency (in PAP language is called Branch) is not the Vice-Chairman but is the Branch Secretary. The Branch Secretaries, are appointed by the MP, conduct the Meet-the-People Session each week and decides on matters pertaining to the local levels with the MP. The third in line would be the Vice-Chairman.”

So, Mr Chew is not an insignificant member of the PAP.

His senior manager position with NParks is in the Industry/Centre for Urban Greenery and Ecology (CUGE) Division.

The other person who has been in the news is Victor Lye.

Mr Lye, although not a Member of Parliament, is nonetheless the PAP Branch Chairman of the Bedok Reservoir-Punggol branch, which is one of 5 electoral divisions in Aljunied Group Representation Constituency (GRC), run by the opposition Workers’ Party (WP).

He is, at the same time, the chairman of the Bedok Reservoir-Punggol Citizens Consultative Committee (CCC), a grassroots organisation under the People’s Association.

So, Mr Lye’s position is not insignificant either.

Now, how do the various appointments of the two men relate to the question of the political neutrality of the Public Service?

Thus, the argument goes, the idea of political neutrality, which most would associate with the Civil Service, rather than the Public Service, does not apply to the two men, who would be seen as public servants, and not civil servants.

But this is not entirely accurate, as we shall see.

Political neutrality or political impartiality applies, actually, to the Public Service as well.

The Public Service includes the Civil Service, and the statutory boards.

“The Singapore Public Service employs some 139,000 officers in 16 Ministries and more than 50 Statutory Boards.” (PSD)

The Civil Service is a component part of or within the Public Service.

The Civil Service is the organisation which encompasses those who work in the various ministries, who number some 82,000 officers.

In 2009, at a students’ forum organised by the People’s Association Youth Movement, the integrity of Singapore’s political and electoral system took centrestage.

Among other questions, the students probed the panel, which consisted of Deputy Prime Minister Teo Chee Hean and senior civil servants, on the political neutrality of the civil service.

This was what the then Deputy Principal Senior State Counsel from the Attorney-General’s Chambers, Owi Beng Ki, said:

“Civil servants under the constitution hold their allegiance to the president. The symbolism that is attached to that is we actually serve at the pleasure of a politically neutral institution. It is one of the values of the civil service that we are politically impartial.”

The Straits Times reported what Tan Boon Huat, the then chief executive director of the PA, had said at the forum:

“Mr Tan, who is also PA’s chief executive director, said his instructions to civil servants working during election season are clear: We do nothing to affect the voters’ choice.”

Indeed, the Straits Times again reported – one month after the general elections of May 2011:

“The PA’s policy is that its grassroots groups have to remain non-partisan.”

These views are actually nothing new and have been the view of the Civil Service for some years.

In a speech published in the Civil Service magazine, Challenge, in 2005, the then Head of the Civil Service, Eddie Teo, addressed the question of political neutrality directly, and is worth quoting in full.

Do note that he was referring to the Public Service.

“In Singapore, where the same political party has been in power for 45 years, can and should the Public Service be “politically neutral”? After such a lengthy cohabitation, is the Singapore Public Service totally politicised and just an administrative arm of the People’s Action Party, as alleged by some critics?

“A former senior civil servant, J.Y.M Pillay, has argued that the Public Service should be impartial but not politically neutral because it must be pro-Government, in that it should serve the government in power. I think this argument is valid only if we make no distinction whatsoever between the government and the ruling political party and between national and party interest.

“Even though the longevity of the PAP has made the distinction blurred, so long as public officers believe that the public interest does not always coincide with the party interest, the term “political neutrality” continues to be a useful reminder of their proper role.”

One would think that indeed there is, and should be, a distinction between the government and the ruling party, and between national and party interest, and that consequently, the idea that the Public Service must be politically neutral is relevant.

In fact, as shown above, Mr Teo’s views are held by the Civil Service to this day.

Two hats but impartial and neutral?

So, it is not in dispute that the Public Service, including the Civil Service, must be politically neutral.

But is this possible if the same individual public/civil servant is also a member of a political party, and especially one who holds political positions in the party?

While some may say that yes, it is possible for one to be a member of a political party and yet be politically neutral in his dealings with the public, perhaps it is good to be reminded that fairness, like justice, must not only be done but also to be seen to be done.

And why is this important?

The answer has to do with what lies at the very heart of what holds a country together, the glue that holds government and people in a bond – that precious thing we call trust.

If the Public Service, which deals with the public on a daily basis, is seen to not be (politically) impartial, there can only be an erosion of trust eventually.

An example would be the recent spat between the National Environment Agency (NEA) and the opposition Workers’ Party (WP) over the matter of dirty hawker centre ceilings. Some see the NEA as being politically motivated to cast the opposition party in a bad light.

In the past, there was the controversial HDB upgrading programme where the HDB was seen as being politically partisan, and more recently the role of the CCC in Aljunied GRC where the MP of the area has to seek the stamp of support from the chairman of the CCC – who also happens to be the branch chairman of the PAP – in order to organise a grassroots event.

It is thus worth noting that in recent years, government leaders and the Head of the Civil Service have all spoken about this – how we should not erode trust in our public institution.

Has there been a degradation of trust?

In a recent survey on Singaporeans’ trust in their national institutions, the Civil Service was ranked 6th. (See here.)

This is testament to the good work of the majority in the Service, who live by certain ethos, as espoused by Mr Teo in 2005 – an ethos that “is based on the principles of meritocracy, incorruptibility and impartiality; and the core values of integrity, service and excellence.”

Do the perceived political partisanship or political partiality and affiliation of some of our public servants threaten to damage this goodwill of trust which has been built up between the government and the people?

This is to preserve the integrity of the Service, along with its incorruptibility and impartiality, the organisation’s core values.

Otherwise, there is a potential and a risk that such a person might make biased decisions based not on merit but on political considerations, which opens the way to corruption, not to mention the real potential of destroying the trust between the government and the people as well. 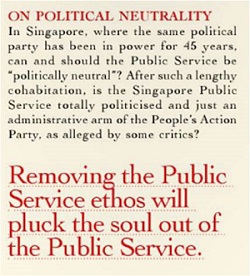 There is a reason why civil servants under the constitution hold their allegiance to the president, as Ms Owi said.

“The symbolism that is attached to that is we actually serve at the pleasure of a politically neutral institution.”

Public servants, thus, should ponder seriously on why this is so, and what this means, and why it is important to be politically neutral – and be seen to be so.