The questionable practice of Grading on the Curve

By Jeremy Chen
It is well known that in the more established public universities of Singapore, NUS, NTU and SMU, assessments of student performance are rank ordered and grades assigned, with restrictions on the required/maximum number of each grade given loosely derived from the normal distribution.
This is the infamous “curve” by which students are graded and that has been recognized to be problematic even by university leadership. Dispensations for deviations are possible, but appeals have to be made and approved.
Fundamentally, “grading on the curve” is a softer form of forced ranking, a practice that, itself, has come under fire within the realm of performance evaluation in the corporate world. Forced ranking is a controversial practice whereby, in performance reviews, managers generate a strict ranking of employees for purposes of rewarding good performers and possibly firing poor performers. (See, for instance, the Bloomberg article on the challenges of measuring performance.) Proponents of its use in the academic sphere say that it staves off the threat of grade inflation and that the positional classification of students is relevant information.
Critics of forced ranking point out that it unfairly penalizes groups made up of high performers and hinders collaboration and risk-taking. Many, including faculty members at local universities, have raised similar concerns about “grading on the curve”. (See, for instance, the articles on Faculty Focus and Monster.) As such, it makes sense to review this questionable practice.
On assigning grades and the “Curve”
The purpose of assigning grades to students is to indicate to them and potential employers their mastery of the coursework. After all, statistically speaking, in so far as a suitable mode of assessment is used, the raw score for a course is a statistic useful for statistical tests for various levels of mastery.
However, while a forced ranking correlates weakly with mastery, it provides very different information. In a class of strong students (for example, self-selected final year honours students in a popular elective), students who are “a little less good” but who are nonetheless excellent will get penalized by the force fitting imposed by grading on the curve. 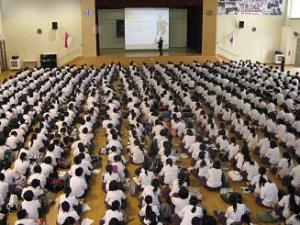 Empirically, such force fitting has led to unseemly and nonsensical gaps between grades of one point out of 100, or even less. For instance, the gap between the lower cut-off of B+ and the upper cut off of B- might be one point, meaning the bin for a B would have a width of one point.
As the saying goes, a little knowledge is a dangerous thing. The notion that the distribution of mastery of content should correspond neatly to a Gaussian curve is an artefact of unwarranted extrapolation from a cherry-picked set of examples drawn from a first year undergraduate introduction to statistics. While a distribution of scores looking like an ideal bell curve is possible to approximately engineer, there is no reason to expect this a priori.
Recommendation: Trust the experts
Broadly speaking, there has to be trust in faculty members that they are able to gauge competence. A professor’s greatest pleasure is seeing students with firm mastery of what he/she has spent a few months instructing them in, and being able to proudly proclaim that each and every one who deserved an A got one.
The “bell curve” should be used only as a guideline without administrative enforcement. Faculty members should be trusted to give fair grades to students even if, at times, there might be many high grades or many low grades. Such a policy revision would improve classroom culture, especially collaboration within mid-sized classes, which tend to be for intermediate and advanced courses where collaboration is most helpful to learning.
If university governments believe there is a need for accountability following such a relaxation (for instance, to mitigate the risk of instructors improperly fishing for good teaching ratings), then the names of instructors might be added to student transcripts beside the courses they taught. This would link a professor’s name to the grades he/she assigned, providing an incentive to provide an accurate assessment of performance, especially at the top end of the grade spectrum, which university administrations are most concerned about.