“Singapore is clearly not ready yet for a serious political cartoonist.”

When I read the above sentence from the recently published article by Kishore Mahbubani, I could almost imagine my former lecturers from NUS circling “clearly not ready,” before scrawling in red ink “Please elaborate.”
One cannot help but wonder how Kishore Mahbubani, as an academic himself, could make such a sweeping claim without any supporting evidence at all. 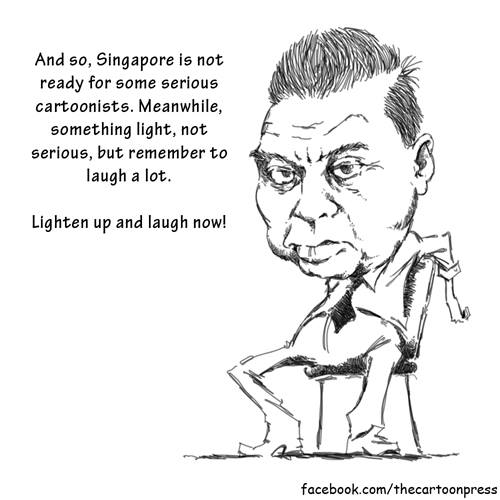 According to him, political cartoons can be useful to get Singaporeans to laugh more, as part of his overarching call to “Love Singapore,” but we need to “encourage a culture of cartoonists by getting some of our leading citizens to allow themselves to be parodied.”
Imagine that — pre-approved caricatures!
Sharpen your pencils, cartoonists…but first, please get permission from whom you are lampooning. If he had done so, Leslie Chew would probably have saved himself quite a lot of legal worries. At one expense, of course, his freedom to express himself.
The only thing Singapore needs for a culture of cartoonists to thrive is for politicians and government agencies to back down and grow a funny bone. In fact, only then can political satire, as a whole, flourish.

Recently, just days before the opening of Dim Sum Dollies’ The History of Singapore — Part 2: The Growing Up Years, the show was slapped with an “Advisory 16: some mature content” rating. According to an MDA spokesperson the justification for this rating is the show’s “satirical socio-political references, which would be more suited for a mature audience.”
The rating is not restrictive, though. People below the age of 16 will not be denied entry to the show. A sensible person has to ask: Why rate the show in the first place then?
The censors in MDA must think young people are cultural dupes who can only be granted the privilege of satire after they have predigested it for them, and preempted their response with a warning.
The fact that Dream Academy, the theatre company behind the Dim Sum Dollies show, had to assure people that nothing was cut from the show speaks volumes. We have become all too used to the possibility of satire being silenced, whether through self-censorship by artists to avoid the ratings conundrum, or through the imposition of MDA regulations.
Satire, by its very nature, is a subversive enterprise. As the late, great George Carlin once said: “I think it’s the duty of the comedian[in turn, the satirist] to find out where the line is drawn, and cross it deliberately.”
Either you laugh during this transgression or you don’t.
A failed punchline that bridges no gap between the satirist and the audience is the only silence with which any satire should be judged.
Other than an interest in current affairs, all you need to be ready for political cartoons or any form of political satire is simply to be open to laughter.