Forget about the ministers. We all know they are the highest-paid public officers in the world. Singapore’s ministers occupy probably the top 10 to 15 positions on such a list.
Even a junior minister would earn more than many other head of states.
So, it is with quite some disbelief that Prime Minister Lee Hsien Loong, once again, defended the salaries of government officers.
“In principle, we are not talking about high salaries, what we want are realistic and correct salaries,” he said in an interview with a Chinese television outlet.
Well, if your principle results in highly skewed salaries for public servants (yes, servants), then surely something is terribly wrong.
And while we may argue about how our ministers are worth their multi-million dollar salaries because they have much to do, what about the other public officers – namely the Members of Parliament (MP).
Let’s break it down into simple terms.
An MP is now paid S$16,000 a month.
That means a total of S$192,000 per year.
A parliamentary term lasts five years.
This means an MP would be paid (S$192,000 x 5) = S$960,000.
Now, in Singapore, an MP is also allowed to hold on to his own day job (unless he is a minister).
What this means is that his MP work is essentially a part-time job. 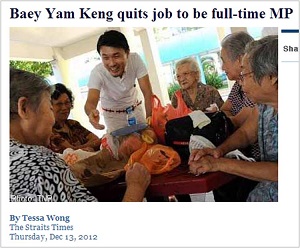 Indeed, there is only a handful of MPs who have chosen to do it full-time, such as Baey Yam Keng, Tin Pei Ling, Foo Mee Har and the opposition Workers’ Party MPs, such as Chen Show Mao and Pritam Singh..
Now, how is paying almost S$1,000,000 to an MP for what is essentially a part-time job “realistic” and “correct”?
As some have sad, it is indeed the best paid part-time job in the world, probably!
And certainly better-paid than many full-time jobs too.
Yet, here we are negotiating for “more than a year” on whether our security guards could have their pay raised by S$300, so that they could earn S$1,100 per month.
The NTUC happily announced recently that negotiations with employers have succeeded somewhat – that security guards will be paid at least S$1,100.
But there is a catch.
The pay rise will take place only two years later.
Yet, here is the great affective divide, and one of the reasons why the PAP Government is increasingly and dangerously out of touch.
What the security guards will earn in a month in two years’ time will not even be one day’s worth of the Prime Minister’s salary.
In other words, what the PM is paid in one day (S$6,000) will take the security guard about 6 months to earn.
Is this chasm “realistic” and “correct”?
Some have argued that it is right for the PM to be earning such amounts of money since he is like a chief executive officer of a company.
Those who make such an argument fails to see a vital point.
That being a leader of a nation is completely and utterly different from that of being a CEO.
A leader of a nation must have that moral authority for him to lead. This authority is eroded when he pays himself an amount which is astronomical to the average person.
In effect, when you are paid $6,000 a day, you cannot but lose touch with the common man and woman, the very people from whom you derive your moral authority.
It is what, one suspects, former head of the Civil Service Ngiam Tong Dow, was alluding to, when he said things started “to go downhill” when we began to pay ministers such astronomical salaries.
Moral authority is important for it also engenders respect and even deference, along with faith and trust in leadership.
These are vital things in order for leaders to lead a nation.
“[It is] wrong to think that a bigger pay would undermine the moral authority of the government,” Minister in charge of the Civil Service, Deputy Prime Minister Teo Chee Hean said in April 2007 during the debate on increasing civil servants’ pay.
DPM Teo was wrong – and the government only realised this in 2011, when the people became so incensed that they cast their votes against the party during the elections.
So, the government learnt the lesson the hard way.
It is no surprise that immediately after the results of the elections, PM Lee called for a review of ministers salaries – the very first thing he did after the elections.
And swiftly, perhaps on the realisation of how upset Singaporeans were with the issue, Mr Lee convened the review panel just two weeks after the election results.
And less than a year later, in January 2012, the review committee recommended salaries be slashed.
Still, it leaves our ministers hogging the top of the list of best-paid in the world.
And this latest remark by PM Lee does not help things. It raises question of his moral authority to speak on the issue, and if he should be the one to decide whether a salary is “realistic” and “correct”, given that he is a beneficiary of such a decision.
There is no justification for such a huge salary gap between those in leadership and those they lead.
There certainly is no justification to pay any public official a million dollars for working part-time for five years.
How is that “realistic” and “correct”?
And perhaps this proves the point precisely – that those who think such salaries are “realistic” and “correct” are probably saying so from the comfort of the ivory tower.