Charges against Ho Juan Thai – errors in claims and contradictions?

By Howard Lee
Last week, Minister of State in the Prime Minister’s Office, Mr Sam Tan wrote in to The Online Citizen to express his views on some of the article published in relation to Ms Tan Pin Pin’s film, To Singapore With Love.
In his letter, Tan claimed that Mr Ho Juan Thai “had made inflammatory speeches in GE 1976 as a Workers’ Party candidate” which was the context in which Ho fled Singapore to the UK. Tan also said that Ho’s claims that “he was a victim of police intimidation, and on the other, that he was willing to turn himself in for questioning” was “contradictory”.
Finally, Tan suggested it was “revealing” that after Ho’s departure, “his WP colleagues then did not make much fuss on his behalf nor did they similarly abscond to other countries.  Why did they not do so, or run away like him, if there was such a pervasive climate of intimidation?”
WP’s silence?
There are, however, a number of problems with Tan’s presentation. For a start, Tan’s claim that members of WP did not speak up much on his behalf is wholly inaccurate.
A simple search of the National Library Board’s newspaper archives would have revealed that then opposition Member of Parliament, JB Jeyaretnam went public on at least two occasions in defence of Ho, or to at least call for his uninhibited return. 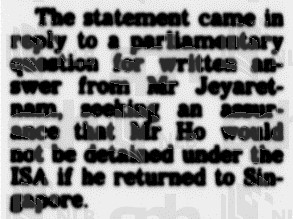 Indeed, Jeyaretnam was not the only member of an opposition party to call for greater clarity on Ho’s case. Chiam See Tong, then heading the Singapore Democratic Party, also called for the charges against Ho to be laid bare in public.

In the public realm, it was clear that at least two politicians have spoken up about Ho’s case. Why then did Tan say that WP was quiet on this matter?

Voices in Parliament, too?
Indeed, one of the above-mentioned plea by Jeyaretnam was attributed to a parliamentary question raised by Jeyaretnam. A closer search of parliamentary records would reveal that Jeyaretnam spoke up for Ho on at least four occasion – in 1982 and 1983 as an MP, when he won Anson as a WP candidate, and in February 1999 and March 1999 as a Non-Constituency MP, also under the WP banner.
In fact, records also show that in February 1999 Low Thia Kiang, then MP for Hougang and the current secretary-general for WP, supported Jeyaretnam’s questions on matters regarding Ho’s charges and return.
In these four occasions, each query raised was for a different matter specifically, but all led to questions on Ho’s culpability in the events in 1976, his eligibility to return and his safety from the Internal Security Act.
Why, then, would Tan be of the view that Ho did not have the support of his political party, not to mention that of another party’s politician, Chiam?
Varying “charges”?
Nevertheless, Tan’s claim that Ho’s statement on police intimidation was contradictory might be valid; but only if put in perspective of the charges that were laid – or for that matter, not laid – against him.
Again, a study of Parliamentary records would be able to track precisely what the government in general – and the Home Affairs Ministry in specific – said he is guilty of. However, at times, there does not seem to be a clear indication as to whether he is “wanted for questioning” or if specific charges have been logged relating to contravention to specific Acts.
Most recently in October 2014 , we had Dr Yaacob Ibrahim, Minister for Communications and Information stating that Ho had “committed Exit Permit offences”.

“Ho Juan Thai had admitted in an open letter in 1982 that he had amended the expiry date of his Singapore passport; he had also committed Exit Permit offences when he left Singapore illegally. Nevertheless, the Government has offered him a Document of Identity on at least three occasions to return to Singapore, but he chose not to do so.”

However, in March 1999, Assoc Prof Ho Peng Kee, then Minister of State for Home Affairs, indicated that Ho “will be questioned” for these offences.

“Mr Ho will be questioned by the relevant authorities for possible offences under the Immigration Act and the Enlistment Act as well as over his racially inflammatory speeches at election rallies during the December 1976 General Election. If Mr Ho is guilty of any wrong-doing that warrants his arrest or detention under any law, Mr Ho must be dealt with accordingly.”

Is Mr Yaacob then saying that Ho is guilty of offences without having been questioned since 1999?
And even earlier in February 1999, Assoc Prof Ho laid out for Jeyaretnam the specific details of the ISA charge, with not much clarity.

“SIR (Singapore Immigration and Registration) has not issued Mr Ho a Singapore passport for the following reasons:
a) Mr Ho is required to respond to SIR’s queries over the renewal endorsement in his expired Singapore passport. Mr Ho had publicly declared that he amended the expiry date of his passport, which expired in December 1976, to enter the UK in July 1977. If this is true, this may constitute an offence of forgery.
b) Mr Ho has been an Exit Permit defaulter since August 1986. He is therefore required to answer for his Exit Permit offence upon his return to Singapore.
c) Although no warrant of arrest has been issued against Mr Ho, the authorities would like to interview him over his racially inflammatory speeches at election rallies during the December 1976 General Election in which he ran as the Workers’ Party election candidate in Bukit Panjang.”

It would seem that since 1999, no warrant of arrest has been issued against Ho. So why can’t the government publicly commit that Ho would not be arrested under the ISA for his alleged offences?
In fact, Jeyaretnam seems to have taken pains to confirm as much on Ho’s actual culpability:

“Mr Jeyaretnam: If Mr Ho has committed any offence, the answer is to prosecute him and ask for extradition of him from the United Kingdom to Singapore. I take it there is an extradition treaty. Why deny him a passport?
Assoc Prof Ho Peng Kee: That is exactly what we want to find out and have asked him to return. We are prepared to issue him a Document of Identity for him to return to Singapore, after which the authorities would question him to ascertain whether or not he has committed any offence and, if so, what offences he has committed. So, Mr Ho should come back and we can get to the bottom of it.”

So, the government has acknowledge that it has been trying to “get to the bottom of it”, and has yet to ascertain the offences he has committed, yet cannot guarantee Ho would not be detained until after he has been questioned?

Oddly enough, the need to question Ho dates as far back as March 1983, when Chua Sian Chin, then Minister for Home Affairs, indicated that there was “prima facie” evidence – evidence made on first observation that is presumed to be true unless proven otherwise – for Ho’s crime.

“…I had stated that there was prima facie evidence to justify Mr Ho Juan Thai’s possible detention under the Internal Security Act and that Mr Ho’s championing of Mr Tan Chay Wa’s cause was an indication of Mr Ho’s political sympathies and, possibly, also his affiliations… as far as Ho Juan Thai is concerned, why should we hold a public inquiry to clear him? He is a fugitive from Singapore. What we are asking him to do is to come back and be interrogated and face the law of this land. To hold an inquiry into Ho Juan Thai is a waste of time and public funds.”

Reflecting historically on the statements made by our leaders, is the authorities effectively saying they have substantive evidence of Ho’s crimes, but have not or is not laying charges on him, because they still need to question him? Yet without having questioned Ho since he left, they retain the right to arrest and detain him without trial?
Perhaps Mr Sam Tan’s verdict of Mr Ho Juan Thai contradiction is true, but only because the government has not been able to clearly define his crimes or charge him properly for it, in what Tan has alluded to as “statements on public record”.
Perhaps it is now incumbent upon the current Minister for Home Affairs to clear the air (yet again), show the evidence for Ho’s crimes, and put out some charges for the public record. Otherwise, Tan’s statement, and any that come before or after his, would really be another your-word-against-mine. Ironically, to quote Tan, the government’s inaction on its own behalf speaks louder than Tan’s open letter.