The Battle for Merger re-staged: SG 50 and the art of shadow boxing

While we accept that Lim Chin Siong is a Communist, there is no evidence he is receiving orders from the CPM, Peking or Moscow. Our impression is that Lim is working very much on his own and that his primary objective is not the Communist millennium but to obtain control of the constitutional government of Singapore. It is far from certain that having obtained this objective Lim would necessarily prove a compliant tool of Peking or Moscow. [P. Moore, deputy British high commissioner, Singapore to Sandys]Secretary of State D Sandys, 18 July 1962 CO 1160 in Comet p. 39]

Shadow boxing
In his heyday, Lim Chin Siong was the PAP’s feared political nemesis; he has become the albatross around the party’s neck. Any hint that Lim was not a MCP member, was not a subversive and had no intention of supplying arms to the Brunei rebellion would raise questions about Operation Coldstore, and the morality of how the PAP came to rule Singapore.
Nevertheless Lim, who died in 1996, is not the main target in the 2014 exercise of re-staging the Battle for Merger. Nor is it the historians who write ‘revisionist history’ who are but sideshows or collateral damage.
That honour goes to the former political detainees who have in the last decade step by accelerated step made their narrative public through interviews, speeches posted on youtube, and publications.
They have continued to insist that they have never been communists or subversives, and had refused to sign any ISD statements, which was the only way to obtain release. Said Zahari, Lee Tee Tong, the late Dr Lim Hock Siew, Dr Poh Soo Kai, Chng Minoh endured imprisonment for as long as it took for them to earn the right to demand accountability.
They have also reaffirmed that Lim Chin Siong was their legitimate and respected leader.
The former long-serving political prisoners and their counter-narratives have been studiously avoided by the authorities, leaving it for academics to sniff condescendingly that one has to be aware that they may have an ‘agenda’. They do indeed have an agenda, and have made that very clear: demand for evidence of the charges they were accused of, and the abolition of the Internal Security Act which their cases show as having been thoroughly abused.
The re-staged Battle has been carefully circumscribed to go no further than the referendum results; there is no mention at all of Operation Coldstore, which remains the elephant in the class/room.
A show of battling the communists  is made, while the real problem is the strength of the opposition who follow the constitutional path.
Reality Check 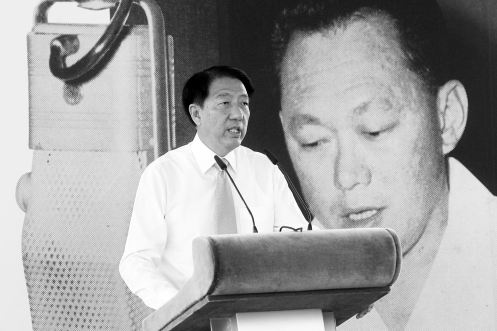 It has been endlessly said that every society needs a narrative that knits it together. Such a narrative should articulate the fundamental and attractive values underlying it. As a state initiative, it should set the tone of embodying high-minded ethos, fostering mutual understanding and  togetherness, and project a vision of a harmonious society.
Sg 50 can indeed be an occasion for Singaporeans to ‘reflect and take stock of their society’, to ask ‘how did we get here from there, in the span of 50 years’.
An occasion for breaching the polarization that afflicts our history.
For the authorities to demonstrate that they possess wisdom and integrity, are ‘their own men’, humble, even-handed, inclusive,  forward-looking.
Above all that they are true to themselves and to the people of Singapore.
This article was first published at minimyna.wordpress.com