By Andrew Loh –
Repeating what he had said last September, Prime Minister Lee Hsien Loong cautioned that Singaporeans should “always know that somebody can take your lunch away.”
Mr Lee was speaking at the Forbes Global CEO Conference at the Shangri-La Hotel on Tuesday.
Last September, Mr Lee had cautioned Singaporeans against foreigners who would “steal your lunch”.
“If you look at other countries – Vietnam, China, even in India, they’re not talking about work-life balance; they are hungry, anxious, about to steal your lunch. So I think I’d better guard my lunch,” he had said.
At Tuesday’s dialogue, Mr Lee was asked by Steve Forbes, Chairman and Editor-in-Chief of Forbes Media LLC, what was next for Singapore after its 50th year of independence.
Mr Lee’s reply was [emphasis added]:

“Looking forward beyond the 50th anniversary… I think that is what Singapore needs to do – to be aware, to be paranoid so you always know that somebody can take your lunch away, at the same time have the confidence that I have a good base, I have a strong position and I am determined to do better, and I think that’s what we want Singaporeans to think and to feel.”

Mr Lee’s remarks are in contrast to what he said six months ago – in April – in an interview with the Financial Times.
Then, he was asked by interviewer, Gideon Rachman, “if Singaporeans still need to feel insecure”, given that “Singapore has enjoyed a long period of peace and ever-rising prosperity and now has one of the highest per-capita GDPs in the world.”
Mr Lee’s response then was [emphasis added]:

“Singaporeans generally feel more secure these days… One of our tasks is to remind them that this a result of a continuing act of will and an appropriate sense of insecurity is very helpful. You don’t have to be paranoid but you do have to take risks very seriously.”

So, which is which?
It is interesting that Mr Lee uses the word “paranoid” to urge Singaporeans to be on guard against global situations, or to be prepared for competition.

Perhaps this goes back to his description of his Government as a “Paranoid Government” in 2007 [pic, right], when he explained his Government’s decision to raise the salaries of ministers and civil servants.
The TODAY newspaper reported Mr Lee:

“The Singapore model is a paranoid one because it prides itself on being ‘totally committed’ to improving the lives of Singaporeans, said Mr Lee, who explained that the decision to increase the salaries of ministers and civil servants now was to ‘produce the best Government’ for all.”

And what is all this paranoia for? 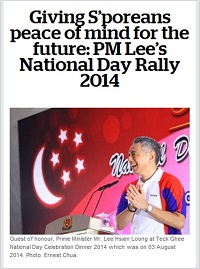 Ironically, it is so that Singaporeans can have “peace of mind for the future”, as Mr Lee said in his National Day Rally speech this year, when he “reiterated the Government’s commitment to give Singaporeans the assurance and peace of mind for the future.”
Perhaps what Mr Lee meant by being “paranoid” is what academic Parag Khanna described as “strategic paranoia” in December last year.
Singapore’s economic success can be attributed to the country being “strategically paranoid”, the Straits Times reported him as having said then.
Mr Parag had also described the “labour movement’s mantra of ‘cheaper, better, faster’, urging companies and workers to become more productive, [as] one example of strategic paranoia”, for example.
Whether it is plain paranoia or “strategic paranoia”, what is clear is that Singaporeans in general, by various social indicators, seem to be straining in their daily lives – from being worried about inflation rates to competition from foreigners for jobs, from working long hours and being stressed at work to not having time for family.
And the consequences of Mr Lee’s Government flooding the island with foreigners – who now make up 40 per cent of Singapore’s total population – along with the projected 6.9 million population figure by 2030, have not helped make Singaporeans feel better either.
It also doesn’t really help that the Government’s messaging seems to confuse as well – one moment telling Singaporeans they “do not have to be paranoid” and the next telling them exactly the opposite.
But first things first: perhaps what would be helpful is to first understand what paranoia is, before we all get carried away fearing shadows when there might be none.