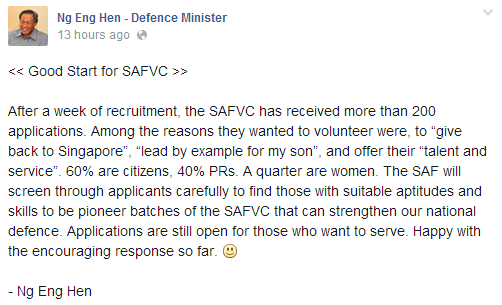 Defence Minister Ng Eng Hen revealed that more than 200 applications have been received for the new Singapore Armed Forces Volunteer Corps (SAFVC) via his Facebook status update last night, Sunday.
Application for the volunteer corps commenced last week on 13 October. The SAFVC was first proposed by the Committee to Strengthen National Service (CSNS) to “enable women, first generation Permanent Residents and new citizens to contribute to national defence and strengthen support for NS (National Service).”
Dr Ng revealed in his Facebook post that a quarter of the applicants are women and 60% of the applicants are citizens, while the rest are Permanent Residents.
“The SAF will screen through applicants carefully to find those with suitable aptitudes and skills to be pioneer batches of the SAFVC that can strengthen our national defence,” he said.
He added that reasons for volunteering cited by the applicants include “give back to Singapore”, “lead by example for my son”, and to offer their “talent and service”.
Dr. Ng ended his status post by stating that, “Applications are still open for those who want to serve” and he is happy with the response so far.