Grassroot leader with PBM accused of being ineffective One of the 3 leaders is Seah Liang Bing: 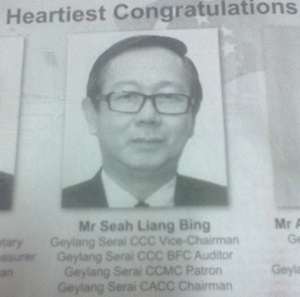 He holds a number of impressive grassroots positions in Geylang Serai:

Not only does Mr Seah involve himself in grassroots activities, he also contributes to sports.
Mr Seah used to be an official of the Basketball Association of Singapore (BAS), representing BAS in various events and ceremonies. For example, in 2011, he was the guest-of-honour at a school basketball event. 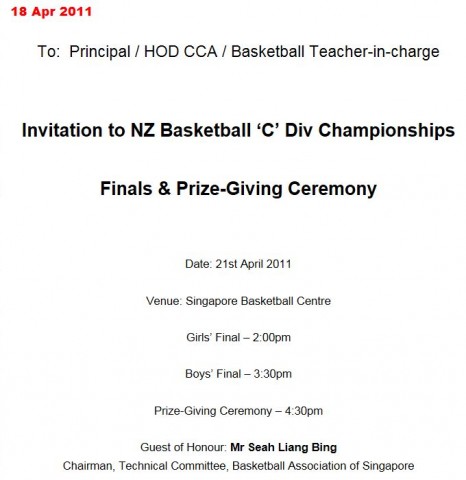 In 2012, he was chosen to be the first Singaporean Technical Official in a world basketball tournament. And in 2013, he helped grace the BAS-Kappa signing ceremony which marked Kappa’s sponsorship of BAS. Such is the prestige of Mr Seah in the sports scene.
Mr Seah’s removal from the Basketball Association of Singapore
BAS consists of a number of basketball clubs in Singapore. Some of the clubs are formed from community centres associated with the People’s Association (PA) while others are not. However, according to sources, a lot of the sports associations here are dominated by clubs from community centres, thereby giving PA a lot of leverage to dominate the sports associations in Singapore.
As a result, many PAP MPs, being PA “advisers”, have ended up leading many of the sports associations. An example is PAP MP Lee Bee Wah, who was the President of the Singapore Table Tennis Association. It is now headed by another PAP MP Ellen Lee, even though she admitted that her nomination “came as a surprise” as she doesn’t “play table tennis”.
Mr Seah was a member of Geylang Basketball Club (GBC), which in turn was a member of BAS. That is, Mr Seah was representing GBC in BAS and the BAS representatives in turn elected him Secretary of BAS.
In May this year, unhappy over promises that were not kept, GBC moved to terminate Mr Seah’s membership, effectively forcing his removal as Secretary of BAS.
Knowing that such an act would anger some officials in BAS, GBC told BAS it wanted to resign from the national basketball body. GBC had been a BAS member since 1999. It is not associated with PA.
GBC president Alex Lim Soo Chye told the media in May, “Since Seah’s membership with Geylang Basketball Club has been terminated, he is no longer the authorised representative of the club. And therefore we expect the BAS to take the necessary steps to see to the removal of Seah as the association’s secretary.”
Mr Lim complained to the media that Mr Seah had made unkept promises to GBC, including helping to form a team to play in the Pro-Am Singapore Basketball League, and the promise of financial support from BAS. “But he never delivered on his promises and we are disappointed,” said Mr Lim.
“In fact, there are so many other reasons why we think he is not suitable to be the secretary of the BAS. Because of his ineffectiveness, we think it’s best that we stop being an affiliate of the BAS. We have close to 200 members and we will chart our own path.”
Mr Seah runs a safety consultancy
Searches on the Internet show that Mr Seah runs a safety consultancy, Systematic Safety Services Pte Ltd.
According to its website, the company:

It provides a wide range of safety services including fire safety.
This article was first published in TR Emeritus.

Grassroot leader with PBM accused of being ineffective