(Image from @ze_kaiser, twitter)
On Tuesday evening, passengers commuting on the SMRT’s North South Line were forced to seek alternative means of transportation when train service between Marina Bay and Newton MRT stations were interrupted due to an alleged train fault.
At around 9.30pm, SMRT sent out a notification that service between Marina Bay and Newton stations was disrupted at 8.41 pm. 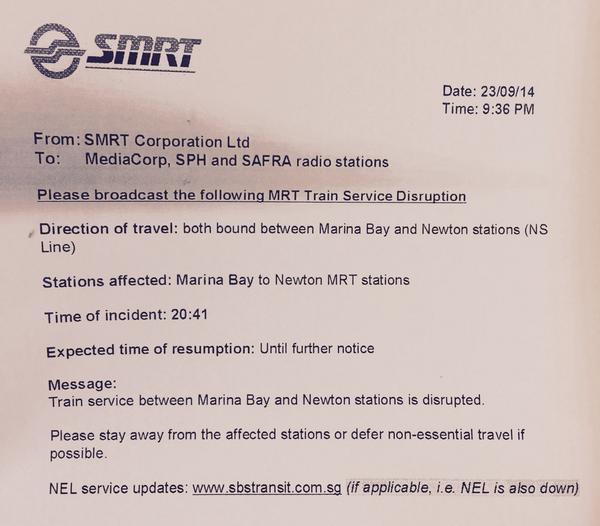 SMRT also notified members of the public of the breakdown via its Facebook page and explained that the breakdown was due to a train fault at Somerset MRT station.

“At around 8.40pm on Tuesday evening, two defective trains were unable to depart Somerset station. As a result train services between Marina Bay and Newton both bounds were affected.
Engineers were immediately deployed on site while free bus services and bus bridging were made available. At around 10.30pm, both defective trains were recovered.
Services resumed at 10.40pm, while free bus services and bus bridging remain available.”

A photo taken by @chestnutsz  apparently shows a train pushing another train out of the Somerset station.
Some of the passengers were left stranded within the stations, waiting for the service to resume. Some complaining that there was no SMRT staff to direct the passengers out of the stations and point out where the free shuttle buses were located.
Although SMRT stated that the service was resumed at 10.40 pm, many complained that the trains were moving at an excruciatingly slow speed.
According to records kept by Failrail.sg, this is the 16th major breakdown in the North South Line this year.