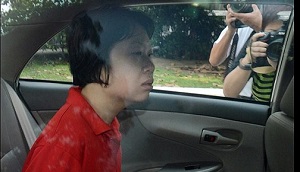 Rebecca Loh Chui Lai, the 32-year old single mother who appeared in news last year for pushing her special needs son out a 5th floor window to his death,  has been sentenced to 10 years in jail for culpable homicide not amounting to murder.
Loh had been remanded at the Institute of Mental Health (IMH) for psychiatric assessment and was found to be suffering from post-schizophrenic depression at the time of the incident. However, she was also found to be “not of unsound mind” and therefore could enter a plea.
Loh has a history of psychiatric conditions prior to the incident and was first seen at the IMH in 2006 with complaints of fearfulness, suspiciousness, poor sleep and inability to cope. Loh was then diagnosed with schizophrenia.
Her 9-year old son, Gabriel Loh, had been suffering from multiple medical conditions including liver impairments since young, which left him in need of 24-hour care.
Gabriel was malnourished, jaundiced and had osteoporosis and the medical fees were just too much for Ms Loh who survived off her elderly mother’s low income as she could not work because she needed to tend to her son every day.
The hearing at the High Court in July revealed that Loh, who was jobless, had been worried about providing for her son and thought that by injuring him she could get him taken away from her to a children’s home, where he could be better cared for.
On Jun 1, 2013,  Loh placed her son on the window ledge where he tried to hold on to clothes poles. However, she pushed his hands away and he fell to the ground.  Gabriel was found unconscious at the foot of the block below the kitchen window. He was taken to the hospital where he was pronounced dead.
Loh was initially charged with murder but this was subsequently amended to culpable homicide which she pleaded guilty to in July after she was diagnosed as “fit to plead” by the IMH.
Under the Singapore Statues, if the act of homicide is done with the knowledge that it is likely to cause death, but without any intention to cause death, or to cause such bodily injury as is likely to cause death, the person shall be punished with imprisonment for a term which may extend to 10 years, or with fine, or with caning, or with any combination of such punishments.