By Philip Ang
While our ‘unionists’ fear the proposed CPF lump sum withdrawal “will bring grief” to low-wage workers, they have somehow overlooked local workers’ grief resulting from the ruling party, People’s Action Party’s flawed immigration policy.
The PAP government has almost doubled the number of Permanent Residents (PRs) from 287,500 in 2000 to 531,200 in 2013. Its stated objective is to ensure “a suitable pool of potential citizens” and it will maintain the number of PRs at between 0.5 million and 0.6 million.
But if the PAP intends to take in only 15,000 to 25,000 new citizens annually, why does it need to double the “suitable pool” to between 20 and 33 times of new citizens? What are PAP’s real intentions?
Most foreigners have no intention of sinking roots in our country and are aware of the benefits of permanent residency, such as being able to profit from public housing. This is confirmed by the following statistics:
The PAP government says it will allow an annual intake of about 30,000 PRs (actual average about 29,000 since 2010). Including the 59,000 new PRs in 2009, total new PRs should have been about 175,000 from 2009 to 2013. Assuming generously all new citizens had been PRs, the net number of PRs should have increased by 83,000 in 2013. 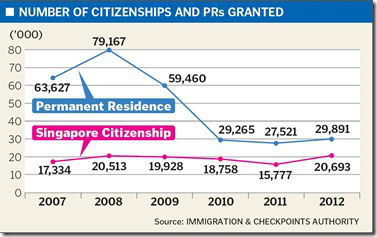 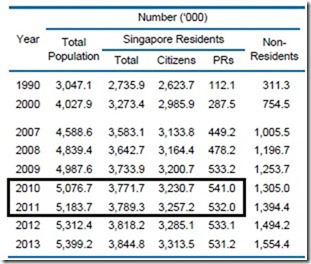 What’s happening? Have taxpayers been paying top dollars for civil servants to come up with an upside down immigration policy?
The reason to require an annual intake of 30,000 PRs is because half of them have been leaving since five years ago. The PAP should start to address the issue of why our Singapore PR has been treated like a piece of tissue paper.
Perhaps the increase in PR activities generate revenue for the different industries ie travel, real estate, retail, etc and therefore the PAP treats our immigration policy as a numbers game? In 2012, PRs bought about 5000 resale HDB flats (20%).
The large number of foreigners giving up their PR is confirmation of PAP’s flawed immigration policy. The selection process for PRs is also flawed as more than 10,000 foreigners have renounced their PR status annually since 2000.
It is not necessary to double the number of PRs in order to ensure a suitable pool of potential citizens. The real reason for the PAP to cheapen our PR is to lower living costs of foreign employees who would otherwise not want to work in the world’s most expensive city. Businesses also benefit indirectly through PAP’s immigration policy.
The unnecessarily large number of PRs has brought grief to citizens as they compete with us on housing, education, healthcare, etc It’s about time the PAP considers a policy shift for its flawed immigration policy.
This article was first published at likedatosocanmeh.wordpress.com