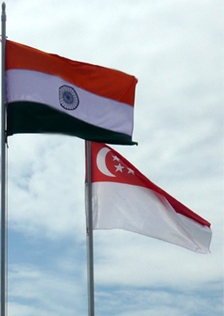 Singapore and India have stalled in negotiations to allow Indian banks and the free movement of Indian professionals into Singapore under the Comprehensive Economic Cooperation Agreement (CECA).
India has signed the first round of the agreement in 2005. But the conclusion to the second round, which started in 2010, has been delayed since then because of the two issues mentioned.
The Business Standard reports:

Singapore is in no hurry to conclude the second review of the Comprehensive Economic Cooperation Agreement (CECA), even as India is pushing for entry of its banks and  professionals into the Singapore market for more than four years.
“Yes, it (the second review of CECA) has taken a bit longer. We are in no hurry. These sort of negotiations take time. The Indian government is yet to come to terms with our laws. If CECA review takes over 10 years then also it is no big deal. Life goes on,” a senior Singaporean government official told Business Standard.
India had signed its first ever CECA with Singapore in August, 2005, under which both sides have a preferential tariff arrangement for over 80 product lines. Besides, India and Singapore enjoy greater access in services and investment under CECA.
[snip]
The Singapore government, in its effort to reduce reliance on foreign workers, passed the ‘Employment Pass Framework’ in 2010 under which the foreign share of the total workforce has to be brought down to around one-third by the companies located there, while encouraging employers to invest in productivity in return for incentives in the form of tax breaks.
However, India has argued that while Singapore has done this to address its own domestic concerns, it had committed a separate provision under CECA, exempting India from such a rule. The matter has taken a political colour now.
“The issue of achieving greater market access in services has become politically difficult,” commerce secretary Rajeev Kher had said recently.

Read the report in the Business Standard here: “Singapore in no hurry to review economic pact with India“.