The United States has “concluded” that Malaysian flight MH17 was shot down over rebel-controlled area of eastern Ukraine on Thursday. However, it has not yet pinpointed who was responsible, according to CNN which spoke to a senior US official.
The Malaysian plane was carrying 295 people on board when it was believed to have exploded in mid-air, killing all on board.
It was flying over the Donetsk region of Ukraine, on its way from Amsterdam to Malaysia, when it fell from the sky.
Malaysian Prime Minister Najib Razak said the Boeing 777-200 plane did not make any distress calls before it fell over Ukrainian skies.
“The Ukrainian authorities believe that the plane was shot down,” Mr Najib said in a statement issued last night.
According to what the senior US official told CNN, “a radar system saw a surface-to-air missile system turn on and track an aircraft right before the plane went down.”
“A second system saw a heat signature at the time the airliner was hit, the official said,” reported CNN. “The United States is analyzing the trajectory of the missile to try to learn where the attack came from.”
Mr Najib, however, said “Malaysia is unable to verify the cause of this tragedy” at the moment.
“But we must, and we will, find out precisely what happened to this flight. No stone will be left unturned,” he said. “If it transpires that the plane was indeed shot down, we insist that the perpetrators must swiftly be brought to justice.”
Ukrainian government officials are claiming that pro-Russian separatists were responsible for the crash.
Ukraine has been immersed in internal conflict since the overthrow of the Moscow-backed regime of President Viktor Yanukovych, which led to President Valdimir Putin annexing the disputed Crimea region.
Mr Putin placed the blame for the MH17 tragedy on the “Ukraine’s military campaign against the separatists.”
“This tragedy would not have happened, if there had been peace on that land, or in any case, if military operations in southeastern Ukraine had not been renewed,” Putin said in televised remarks. “And without a doubt the government of the territory on which it happened bears responsibility for this frightening tragedy.”
On Thursday, Mr Putin and his American counterpart, President Barack Obama discussed the incident during a phone call in which Obama warned Moscow of more sanctions if it does not change course in Ukraine.
“I can confirm that President Putin near the end of this morning’s phone call with President Obama noted the early reports of a downed passenger jet near the Russia-Ukraine border,” White House spokesman Josh Earnest said.
Reports also said that Mr Obama has warned Mr Putin of “additional steps” to the sanctions already in place if Russia doesn’t change course on the Ukrainian issue.
Meantime, Eurocontrol, the European air traffic control authority, said MH17 was flying at Flight Level 330 [approximately 10,000 metres/33,000 ft] when it disappeared from the radar.
“This route had been closed by the Ukrainian authorities from ground to flight level 320 [32,000ft] but was open at the level at which the aircraft was flying,” it said.
The UK’s Civil Aviation Authority (CAA) on 14 June had urged carriers to avoid overflying Crimea and parts of southern Ukraine due to safety concerns, but they were not ordered to avoid the rest of the country.
The CAA said airlines have now been told by the European air traffic control body to avoid the region: “The Ukrainian authorities are responsible for managing their airspace and the UK or other countries cannot enforce airspace restrictions in the area.”
Vice President of Malaysia Airlines Europe Huib Gorter told reporters that the 15 crew members on Malaysia Airlines Flight 17 were all Malaysian nationals.
He gave a breakdown of the known nationalities of the passengers: 154 were Dutch, 27 were Australians, 23 were Malaysians, 11 were Indonesian, six were from the United Kingdom, four were from Germany; four were from Belgium, three were from the Philippines and one was Canadian. Authorities were still trying to determine the nationalities of the other passengers.
Distraught relatives of the passengers travelling on flight MH17 have gathered at airports in Amsterdam and Kuala Lumpur to learn the fate of their missing loved ones. “This is a tragic day, in what has already been a tragic year, for Malaysia,” Mr Najib said.
“As we work to understand what happened, our thoughts and prayers are with the family and friends of those onboard the flight.
“I cannot imagine what they must be going through at this painful time.
“The flight’s passengers and crew came from many different countries.
“But today, regardless of nationality, we are all united in grief.”
This is a video of what is believed to be the moment the plane crashed:

News report of the incident: 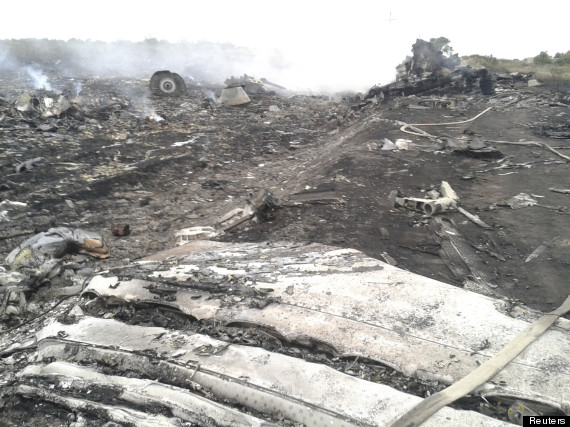