By Tiffany Gwee
A post on the Facebook page of a group calling itself, “We are against PinkDot in Singapore”, has attracted controversy.
The post was apparently an email reply from the National Library Board (NLB) indicating that two books have been removed from library shelves as they were deemed to be not “pro-family”.
The two children’s books in question are “And Tango Makes Three” by Peter Parnell and Justin Richardson, and “The White Swan Express” by Jean Davies Okimoto.
And Tango Makes Three is based on the true story of two male Chinstrap Penguins in New York’s Central Park Zoo. The book narrates the six years of their life when they formed a couple and were given an egg to raise.
The White Swan Express tells the stories of four baby girls from a Chinese orphanage and the families which adopt them. The families include that of a lesbian couple.

In the letter, NLB’s chief librarian Tay Ai Cheng explained that the books were removed after feedback from the public.
“I would like to assure you that NLB takes a strong pro-family stand in selecting books for children,” said Ms Tay. “We take a cautions approach in identifying titles for our young visitors.”
“Besides going through the contents, we also refer to synopses, reviews and other books written by the authors,” she added.
“While we try to sieve through the contents and exercise our best judgement, it is an arduous task to ensure complete adherence of details in the books to our pro-family stand. However, when library visitors like yourself highlight to us any conflicting content within books, we review such books thoroughly and withdraw them from circulation.”
In response to a media query, NLB said that “young children are among our libraries’ most frequent visitors. Many of them browse books in our children’s sections on their own. As such, NLB takes a pro-family and cautious approach in identifying titles for our young visitors.”
It did not reply to queries by the press on how many complaints were received about the titles and why the titles were offered in the first place.
Many members on the “We are against PinkDot in Singapore” Facebook page praised NLB for removing the books.
“We appreciate your staff for doing their best to keep our core values,” Vincent Chun said.
Another member Marianne Su asked the community “to be alert and sieve through the content when (they) borrow books for (their) kids.”
However, NLB’s action also drew criticismsfrom others online.
In the comment section of a local news report about this incident, user Roy Tan questioned the purpose served “by making (our) children ignorant of scientific fact and social diversity.”
“On one hand, we encourage them to be creative; on the other, we censor depictions of diversity and tolerance. How can we achiever greatness as a nation with this schizophrenic and parochial mindset born of paranoia?”
User Leandro Ngo argued that the books “serve as a gentle jumping off point for discussions between parents and children on the diversity of family structures”.
Some users who commented added that this is “unfair discrimination” and firmly believed that the books should be reinstated.
User Cedric Evan-ezer asked, “Why are random people allowed to dictate what we should or should not choose to read?”
Writer Kirsten Han also criticised the move.
“A library is a community’s repository of literature, culture and knowledge,” she said. “It is a place that anyone should be able to access, to read and to learn. It is incredibly worrying that our national library would cave so quickly and so easily in circumscribing the knowledge that Singaporeans – even the little ones – can access.”
In a response letter she wrote to NLB, activist Rachel Zeng said “atypical family units” have been wrongly misunderstood and discriminated for far too long.
“Having been an early childhood educator for the past 10 years,” she said. “I have met and worked with children from different family backgrounds.”
“It is highly important that educators make the effort to create an inclusive learning environment that encourages acceptance and respect for one another. Furthermore it is the responsibility of educators to expose our students to concepts that exist in reality, in order to inculcate a sense of acceptance and respect for diversity within the local and global communities. This is one of the key purposes of education.”
—————–

What the two books are about… 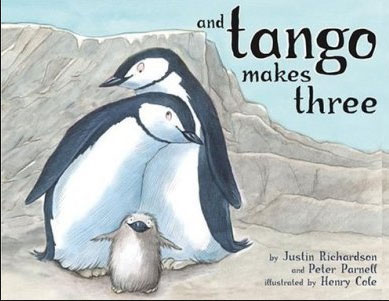 Roy and Silo are called chinstrap penguins because of the delicate line of black feathers that loops under their beaks, as if to hold a hat in place. After years of living side by side in the Central Park Zoo, they discovered each other in 1998 and they have been a couple ever since. Tango, their only chick, was born from an egg laid by another penguin couple named Betty and Porkey. That couple had often hatched their own eggs, but they had never been able to care for more than one at a time. In 2000, when Betty laid two fertile eggs, Rob Gramzay decided to give Roy, Silo, and one of those eggs a chance to become a family. If you go to the Central Park Zoo, you can see Tango and her parents splashing about in the penguin house along with their friends, including Nipper, Squawk, Charlie, Wasabi, and Piwi. There are forty-two chinstrap penguins in the Central Park Zoo and over ten million chinstraps in the world. But there is only one Tango.
And Tango Makes Three has won many awards – including the American Library Association Notable Children’s Book Award and the Bank Street Best Book of the Year in 2006.
[youtube id=”WyPjUa908hM” align=”center”] The White Swan Express depicts the challenges faced by families who adopt children. “In China, the moon shines on four baby girls, fast asleep in an orphanage. Far away in North America, the sun rises over four homes as the people who live there get ready to start a long, exciting journey. This lovely story of people who travel to China to be united with their daughters describes the adoption process step by step and the anxiety, suspense, and delight of becoming a family.”
Cover photo taken from NLB
Editor note: Correction made on description of White Swan Express.