Archbishop William Goh has issued another statement to apologies for and clarify on his earlier statement about lesbian, gay, bisexual and transgender (LGBT) issues, and to clarify on the position of the Church on homosexuality.
The earlier statement, while directed at Catholics, was widely circulated as it was published on the Archdiocese website the weekend just before Pink Dot, the annual event at Hong Lim Park organised by the LGBT community to celebrate the freedom to love. 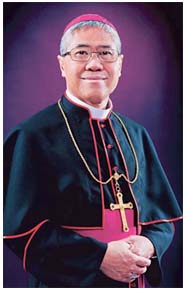 His latest letter was also addressed to followers of the Catholic Church, particularly homosexual individuals who are also Catholics.
“I apologise if my initial statement conveyed insensitivity as from your feedback, I have come to realise that there is much variation in thought and lifestyle within this community. I want you to know that I am not indifferent to your pain and frustration, as I see many Catholics with same-sex orientation for spiritual support, counselling and healing.”
The Archbishop affirmed that the Church does not disapprove of a loving relationship between same-sex individuals “that is chaste and faithful”, as “same-sex inclination in itself is not a sin”.
However, the Church is against “a sexual relationship between same-sex individuals as it is not in accordance with the divine plan of God”. He clarified that there are “many texts in sacred scripture which explicitly state that sexual relationships between those of the same gender are not permissible.”
“As the Bishop of the local Church which is a part of the Universal Catholic Church, my primary responsibility is to instruct the Faithful in accordance with the teachings of the Universal Church. I am not at liberty to change the truth as revealed in sacred scripture and that which is taught by the Magisterium of the Church, with regards to sexual relationships between those of the opposite sex, same gender, or any other issues e.g. divorce, contraception, abortion etc.”
Addressing the issue that homosexual inclinations are a natural occurrence, he said that while the Church is “in a position to learn from scientific discovery”, there is also a need to address both the spiritual and physical aspects of people.  “Hence when science seems to contradict divine revelation as taught in the Bible, our faith must hold fast to the Word of God even if we cannot agree.”
The Archbishop added that science has not proven whether same-sex orientation is due to nature or nurture. “If it were so, there would be no debate,” he said. However, the church needs to teach its followers that sexual relationships between those of the same gender are not acceptable in the laws of God.
He also highlighted the social implications of same-sex unions, which he clarified was what he was referring to in his initial statement, when he used the words ‘detriment’ and ‘destructive’ to describe the effect that LGBT relationships have on on the family and society as a whole.
“When couples with same-sex attraction insist on marriage and adopting babies to form a family similar to that of the conventional family unit; the question arises if the child would receive holistic formation comparable to a child that is cared for in a stable family by a father and a mother… While the argument is that the child may still receive love from both partners who are in a stable same-sex relationship, the lack of a parental figure as portrayed by a member of the opposite sex may still render the child at risk.”
“Hence, considering the future of humanity and the effects on society, not only do the institution of marriage and the family need to be fortified, in the same context, same-sex union cannot be promoted.”
The Archbishop’s message appears to strike a reconciliatory tone with the LGBT community, following the disputes that received much publicity before Pink Dot. The National Council of Churches of Singapore, representing the Protestant faiths, had earlier issued a statement urging “grace and restraint” when interacting with the LGBT community.
The Archbishop has also “tasked the Catholic Medical Guild and the Family Life Commission to set up a pastoral group (currently being formed) for those with same-sex orientation to journey together in faith, in support of one another, so as to live out God’s call to chastity.”
Image – The Straits Times, Raj Nadarajan