The Land Transport Authority (LTA) has just announced the final names for the Thomson Line (TSL) stations which have been approved by the Street and Building Names Board (SBNB). The names were put to a public poll in May 2013 and attracted more than 4,000 responses.
All the final station names reflect the choice of the majority who took part in the name polling exercise. Six of the 22 stations – Woodlands, Caldecott, Stevens, Orchard, Outram Park and Marina Bay – were excluded from this exercise as they are the interchanges for the TSL and will be in operation on existing lines before the opening of the TSL.
LTA first invited the public to suggest official names for TSL stations in January 2013. More than 4,000 suggestions were received. With these suggestions, three names for each station were shortlisted for public polling, based on a set of station naming criteria. The public were then invited to participate in the polling exercise in May 2013 to vote for their preferred TSL station names. More than 4,000 people participated in the polling exercise. Results of the polling exercise were then collated and submitted to the SBNB for approval.
In finalising the station names, LTA also consulted partnering agencies such as the National Heritage Board (NHB), Urban Redevelopment Board (URA), Housing and Development Board (HDB), as well as the Malay and Tamil Language Councils, and the Advisers and grassroots of the respective constituencies where these stations are located. LTA would like to thank all participants who took part in the station naming and polling exercises.
The 30-km long Thomson Line will enhance rail connectivity in the north-south corridors to the Central Business District (CBD) and developments in the Marina Bay area. Fully underground, Thomson Line comprises 22 stations, including six interchange stations: Woodlands, Caldecott, Stevens, Orchard, Outram Park and Marina Bay. These interchange stations will link to the North-South East-West Line (NSEWL), Downtown Line (DTL) and North East Line (NEL) and Circle Line (CCL), providing greater accessibility and significantly improve travel time for commuters.
The TSL will be completed in three stages, with the first stretch (three stations from Woodlands North to Woodlands South) to be completed in 2019. The second stretch (six stations from Springleaf to Caldecott) will be completed in 2020 and the final stretch (13 stations from Mount Pleasant to Gardens by the Bay) in 2021. When fully operational in 2021, the 22 stations on TSL will serve about 400,000 commuters daily.
Final names for the 16 MRT stations of TSL 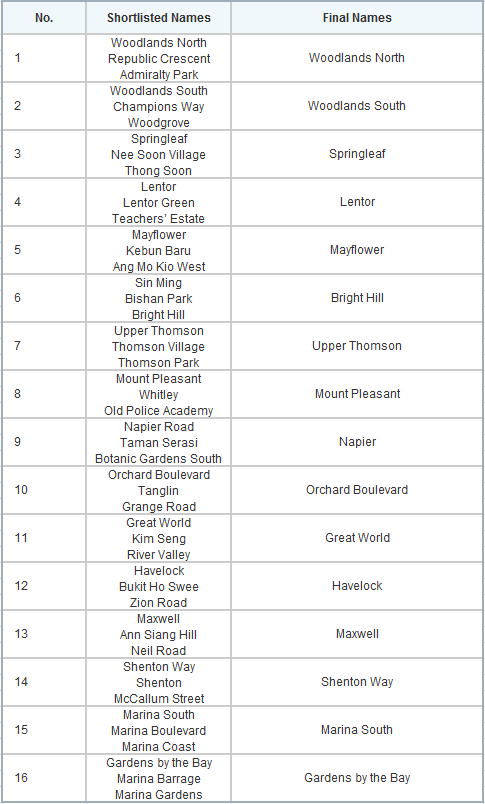