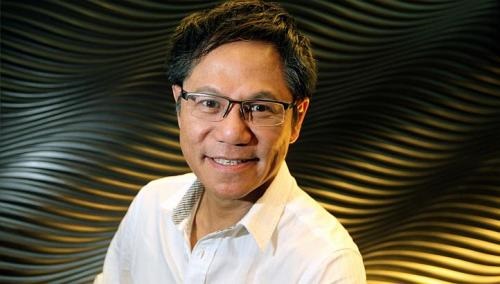 In an attack on the annual “right to love” celebration – known as Pink Dot – organised by the gay community in Singapore, the senior pastor at the Faith Community Baptist Church (FCBC) said on his Facebook page on Monday that the government, in allowing the annual event, is “more than tolerating the gay agenda”.
Senior pastor Lawrence Khong, who has been at the forefront of the anti-gay movement in Singapore, said the government is “bordering on endorsing and emboldening the LGBT claim to gay rights.”
“We must continue writing private letters to our Ministers,” he said in his posting which is addressed to “fellow pastors”.
“But we have come to the point where the Pink Dot Event is getting so unashamedly public and loud with their agenda that we can no longer just rely on private communication.”
He said the “gay agenda” was a threat to the family unit.
“The family unit is the lifeblood of our nation,” he said. “The time to stand and defend what is right is now.”
He urged his followers to “please make a stand for Family” by being part of FamFest Singapore on June 28 and June 29.
FamFest is apparently to promote “the right Family values in SG, supports Families in need & honours Families’ contribution to SG”, and will take place this weekend in all the LoveSingapore network of churches.
Followers are urged to “wear white” to church services as a show of support for “family”, and also for the “Wear White” campaign by some Muslims opposing homosexuality. The campaign calls on Muslim to don white attire when they attend evening prayers this Friday.
Mr Khong wrote on his Facebook page that he is “so happy that Singapore’s Muslim community is making a vocal and visual stand for morality and Family.”
“I fully support the ‘wear white’ campaign,” he said. “FCBC, together with the LoveSingapore network of churches, will follow suit on the weekend of 28 and 29 June, island-wide. I look forward to celebrating the Family with the Muslim community and I am pleased to partner with them in championing virtue and purity for the good of our nation!”
He said “we must put a stop to the public promotion of the Pink Dot movement.”
He charged that “ultimately, what gay activists want is to redefine Love, redefine Marriage, and redefine Family.”
He said the “LGBTs in Singapore have been strategising for some 20 years to normalise homosexuality in our nation” and that “it is time for the Church to work with like-minded groups (like the Muslims) to register our opposition to the Pink Dot Event before it is too late.”
In an apparent reference to companies such as Goldman Sachs and Google, which have supported the Pink Dot event, Mr Khong said, “We must let the Multinational Corporations know that they have no business in supporting this Pink Dot Event. They cannot and should not meddle with our national values.”
“We must let our government know that, in allowing the Pink Dot Event to continue without restraint, they are more than tolerating the gay agenda,” Mr Khong said. 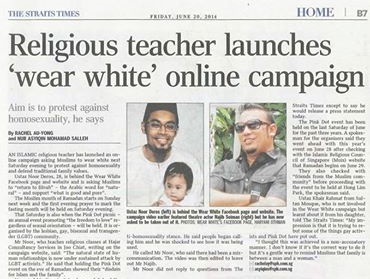 Mr Khong’s attack on the gay community is the latest in a slew of incidents this past week, when the “Wear White” campaign was announced.
It has prompted Deputy Prime Minister, Tharman Shanmugaratnam; the Minister in charge of Muslim Affairs, Yaacob Ibrahim; and the Islamic Religious Council of Singapore or Muis, to urge restraint and understanding.
Muis has advised Muslims not to be confrontational towards the LGBT community and the lifestyle they choose to adopt.
While MUIS has indicated that it does not approve of the “pervasiveness” of the LGBT lifestyle, it also cautioned against mosques being “involved in the crossfire” between the Pink Dot and Wear White initiatives.
It was a position reiterated by Dr Yaacob.
“It is important for us to remember that mosque is a neutral religious platform,” he said on Sunday. “It is there to serve the Muslim community of all shapes, shades. And if you are there to fulfil your religious obligations, the mosque will be there for you.
“At the same time, the mosque can allow other activities such as social activities and we want to reach out to as many Muslims as possible. It has to be on a note which is inclusive, all-embracing and that was the purpose of the advisory so that we don’t take sides, and more importantly we open our doors to anyone.”
Read also:
Christians join Muslims in protest against Pink Dot
Catholic Church takes harder stance on LGBT “lifestyle”