Meaningless surveys if relevant agencies do not act on findings

By Leong Sze Hian and SY Lee
We refer to the article “More workers report positive outcomes from national skills training framework” (Straits Times, Jun 11).
The article states that “A greater proportion of workers reported receiving a pay raise – 19 per cent did so last year, four percentage points more than the year before”. So, does it mean that despite this year’s 4 percentage points improvement over the year before – 81% did not get a pay raise?
Such “satisfaction” type surveys like the one conducted by Workforce Development Agency (WDA) may be quite meaningless, unless they are supported by the statistics of the outcomes. For example, if you ask workers – what is the most important desired outcome of training – arguably, the answer may be an increase in their pay.
So, let’s look at some recent job and wage statistics.
Last 6 years’ negative real wage change
The annual change in real total wages (including employer CPF contribution) was dismal, for the last 6 years from 2008 to 2013, at -1.7, -1.0, 2.9, 0.9, 0.4 and 2.9%. (Source: Ministry of Manpower’s report on wage practices 2013)
The real total wage change (excluding employer CPF contribution?) was even worse at, -2.4, -1.0, 2.7, 0.1, -0.8 and 2.9%, respectively.
The real basic wage change was equally bad, at -2.2, -0.7, 1.1, -0.8, -0.1 and 2.7%, respectively.
So, does this mean that the cumulative annualised real basic wage change from 2008 to 2013 was about slightly less than 0?
150,000 or 114,100 earning less than $1,000 in 2012?
The Ministry of Manpower (MOM) told The Straits Times that there were 117,500 local full-time workers earning $1,000 and below last year, down from 150,000 in 2012.
The above statistics given by MOM are puzzling, because the total number working full-time and earning less than $1,000 was 114,100 in 2012, according to the MOM’s Labour Force in Singapore 2012 (Table 25, page 126).
Earning less than $1,000 increased 3%?
Now that we know from news reports that the number of full-time workers earning less than $1,000 was 117,500 last year – does it mean that it actually increased by about 3% from 114,100 in 2012?
There was an increase of about 3.4 per cent for 2012, from 2011′s 110,400 (in spite of NWC recommendations and not even accounting for inflation).
The number of locals (full-time and part-time) earning less than $500 and between $500 and $1,000 was 51,300 and 186,700, respectively in 2012. This means that a total of 238,000 locals (full-time and part-time) earned less than $1,000.
Yet another recommendation for less than $1,000 workers?
The National Wages Council (NWC) has recommended in its annual wage guidelines that workers earning less than $1,000 each month should get a pay hike of at least $60 , which follows its previous recommendations in 2012 and 2013 that these workers receive minimum pay hikes of $50 and $60.
6 in 10 followed the guidelines?
It further added that while more firms followed the guidelines last year – about six in 10 compared to three in 10 in 2012. The National Trade Union Congress (NTUC) noted that they still lag behind the nine in 10 unionised firms.
8 in 10 will follow the guidelines?
Why do the above statistics seem to differ from that reported on the same day in the Business Times (“Minimum $60 pay rise for low income“, May 31) – “As at the end of last year, almost eight in 10 employers in the private sector had given or said that they intended to give a raise to workers earning less than $1,000 a month, up from six in 10 in 2012″?
What we need to know is the percentage of workers earning below $1,000 who received the recommended increase, instead of what proportion of employers or unionised companies who were surveyed accepted the recommendations or said that they intended to do it?
In this connection, the last time that the specific statistic was available last year for 2012, was that more than 70% who did not get the recommended increase.
So much for yet another survey? 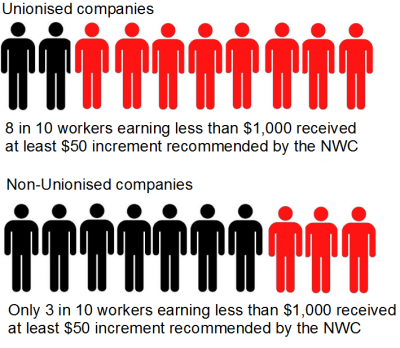 If you remember last year, only 3 in 10 workers earning less than $1,000 received the at least $50 increment recommended by the NWC in 2012. (see here)
“Spin doctoring”?
This starkly sobbing statistic has to be seen in the “spin doctoring” context that it was reported in the media that while eight in 10 companies in the unionised sector accepted the recommendations and boosted the pay of their low-wage workers by at least $50 in 2012, but only three in 10 non-unionised companies followed suit.
If not for the MOM report which came out just a few days after the media reports last year – we wouldn’t be the wiser that 8 in 10  and 3 in 10 non-unionised (implying unionised is so much better?) – actually means in totality only 3 in 10 of ‘less than $1,000′ workers got the $50!
63% of employers won’t increase pay more?
It was reported that “While 37 per cent of employers surveyed said they would give staff larger salary increments, the rest said they would not change pay levels” (“OCBC gives staff $3m in Wage Credit payouts”, Straits Times, May 19).
Does this indicate that the Wage Credit scheme may be a failure?
1 in 3 no pay increase?
As if it isn’t bad enough that about 2 out of 3 employers indicated that they would not increase pay more because of the Wage Credit scheme – Of the Singaporeans eligible for the Wage Credit scheme, two-thirds received pay rises last year, which the first tranche of the Wage Credit Scheme payouts is helping to fund this year.
Does it mean that 1 out of 3 Singaporean workers who earn less than $4,000 did not get any pay rise at all?
So what is MOM and WDA going to do about the statistics that has been mentioned above and the findings from the survey?

Other workforce statistics that you might want to know about.

For just US$7.50 a month, sign up as a subscriber on The Online Citizen Asia (and enjoy ads-free experience on our site) to support our mission to transform TOC into an alternative mainstream press.
Tags: MOMWDA

‘Illegal employment’ and ‘unacceptable accommodation’ are most common offences by employers in CMP sectors: MOM

Meaningless surveys if relevant agencies do not act on findings