By Andrew Loh
What was billed as an “honest conversation” about the Central Provident Fund (CPF), a public forum by People’s Action Party (PAP) Member of Parliament (MP) Hri Kumar has turned into well, a farce about who are allowed to attend.
The event, titled “CPF – An Honest Conversation: Public Dialogue with Thomson-Toa Payoh Residents”, is to take place this Saturday, 14 June, at the Thomson Community Club.
Mr Kumar is the MP for the Bishan-Toa Payoh GRC, in which the precinct of Thomson falls under.
One of the stated aims of the forum is “to tackle difficult questions such as who should be responsible for ensuring retirement adequacy, and what is the Government’s role in this”, the event’s Facebook page said.
“If our earlier dialogues are any indication, it promises to be a lively one,” it added.
It is unclear when the event page was set up but it seems to be around 4 June – a blogger had written about it then. (See here.)
While the title of the event indicated that the dialogue was to be with Thomson-Toa Payoh residents, there were no stipulations that non-residents would not be allowed to attend as well.
In fact, one Abdul Malik Mohammed Ghazali – who said that he lives in Tanjong Pagar GRC – specifically asked about this on the Facebook page. Mr Abdul Malik asked:

“Can residents from other parts of Singapore join in? I’m very keen on this topic, but so far no such event here in Tanjong Pagar GRC that I know of.”

“Mr Ghazali, you are welcome to attend the event. You can accept the online invitation or register with Thomson CC.”

Mr Kenneth Jeyaretnam, who is the secretary general of the political opposition Reform Party, also indicated that he would like to attend the dialogue.
Mr Jeyaretnam wrote on the event page that he had “accepted the online invitation as suggested” by Mr Kumar.
We also understand that blogger Roy Ngerng, who had written extensively about the CPF issue, had also accepted the online invitation to attend the event.
However, what transpired shortly after has left many puzzled.
Mr Kumar first posted that the response had been good, “with even Singaporeans from outside the division signing up!”. 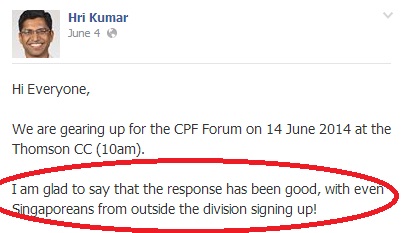 He later said that the event had received “a large number of over-the counter and on-line (sic) registrations for the CPF forum.”
“We are therefore closing the registration,” he said.
The Facebook page was then shut down.
Some bloggers also reported that some comments by Mr Jeyaretnam and Mr Ngerng were removed before the Facebook page was apparently removed.
This gave rise to confusion on whether those who had accepted the online invitation, as suggested by Mr Kumar himself, would be allowed to attend the dialogue.
On 9 June, Mr Ngerng wrote to Mr Kumar personally to seek confirmation that his online registration was valid and that he would be allowed to attend the “honest conversation”.
Mr Ngerng’s email said:

Dear Mr Hri Kumar,
I am writing in to you to confirm on my attendance for the public dialogue, CPF – An Honest Conversation: Public Dialogue with Thomson-Toa Payoh Residents.
I had registered for the event via the Facebook event page before the on-line registration was closed.
I would like to confirm on my registration. I understand that you had stated that this dialogue is open to all Singaporeans and look forward to being able to participate in this honest conversation.
Thank you for your attention in this matter. I look forward to attending the open dialogue.
Thank you.

Mr Kumar replied shortly after, claiming that he “[does] not recall saying that it is ‘open to all Singaporeans’.”

Hi Roy,
I had organized the dialogue for my residents, as they are my constituents. The title of the invitation expressly states that. I do not recall saying that it is “open to all Singaporeans”. Can you let me know where I said that?
Could you let me know if you are a resident of Thomson – Toa Payoh or Bishan – Toa Payoh GRC?
Regards,
Hri

In his reply to Mr Kumar, Mr Ngerng wrote:

Dear Mr Hri Kumar,
Thank you for your email.
I might have been mistaken.
According to Ariffin, who had screenshot the conversations on the Facebook event page, a Singaporean had asked if “residents from other parts of Singapore (can) join in” and you had replied that he is “welcome(d) to attend the event (and that he) … can accept the online invitation or register with Thomson CC.
The screenshot is captured in the article below:
http://ariffin-sha.com/hri-kumar-blocks-roy-and-kj/
I am not a resident of Thomson – Toa Payoh or Bishan – Toa Payoh GRC. Would I still be able to attend? Some friends of mine, Kenneth Jeyaretnam, Leong Sze Hian and Ariffn Sha, would also be interested to attend. If we can attend, it would be great!
Thank you!

From: “Hri Kumar” Date: 10 Jun 2014 12:20
Subject: Re: Regarding Interest in Attending CPF – An Honest Conversation: Public Dialogue with Thomson-Toa Payoh Residents
To: “[email protected]”
That response was to that individual resident who asked.
I am currently not in Singapore with limited connection, hence the delay in response.
Regards

It is a bizarre reply from Mr Kumar.
What does, “That response was to that individual resident who asked”, mean?
Is Mr Kumar saying that his answer to Mr Abdul Malik does not apply to other non-residents of Bishan-Toa Payoh or Thomson who might want to attend the event?
If so, why the selectivity?
And why does Mr Kumar not indicate so in his event’s page?
And also, why do his comments and posting on the Facebook page seem to indicate that he welcomes all – residents and non-residents?
Why did he seem happy that “even Singaporeans from outside the division” are signing up, without stating that they may not be allowed to attend the event, or explained that they should not sign up at all?
For an event that is billed as “an honest conversation” with the public, the PAP MP seems to be flip-flopping in who he is allowing to attend the dialogue.
This has led to speculations that the MP is only allowing selected individuals to attend – and these could be those from the pro-government, or pro-PAP grassroots organisations, and members of the PAP.
Mr Jeyaretnam, in a Facebook post of his own, said that he was “very surprised to see what looks like an email from Hri Kumar to Roy Ng telling him that the event is for residents only.”

“Still that isn’t what he told Malik and I. I can’t verify that email but certainly I haven’t received one. Hri Kumar, I am sure, is a man of his word. He is a Senior Counsel and a PAP MP so his integrity is above reproach.
“Hri told me in a public forum that non-residents could attend, he confirmed publicly that online acceptance would suffice and he did not respond to or contradict my many public comments on the public event page and his public personal profile, relating to my attendance.”

Mr Jeyaretnam then gave 4 possibilities for Mr Kumar’s contradictory replies, one of which was:

“Hri Kumar wrote neither and has been kidnapped by aliens.”

Incidentally, in 2012, some bloggers were uninvited to a dialogue with Prime Minister Lee Hsien Loong, after the invitation – which the bloggers had accepted – had already been confirmed. (See here.)
The bloggers apparently were replaced by many PAP members at the eventual forum on tv.
More recently, in February, presidential candidate Dr Tan Cheng Bock was uninvited to an Istana party. (See here.)
Read also: “Hri Kumar to Roy: CPF dialogue only for my residents“.