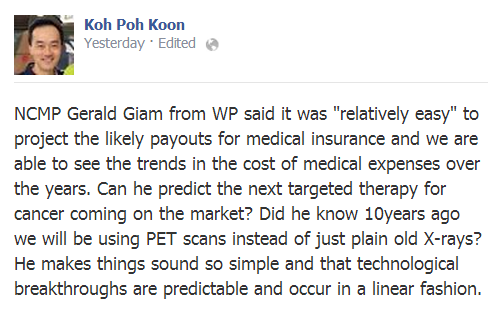 PAP Candidate in the Punggol East By-elections 2013, Dr Koh Poh Koon wrote on his facebook saying that Non-constituency Member of Parliament (NCMP) Gerald Giam from Workers’ Party had made it sound so simple when he said in Parliament that it was “relatively easy” to project the likely payouts for medical insurance and the trends in the cost of medical expenses can be seen over the years.
NCMP Gerald Giam said,

“Even a risk sharing scheme like MediShield, which is supposed to be a form of social health insurance, is run more on commercial than social principles. The MediShield Fund had a capital adequacy ratio of 161% in 2012, which is more than 40% higher than what the Monetary Authority of Singapore (MAS) expects commercial insurance funds to hold. The loss ratio of MediShield averaged just 63% from 2001 to 2012. This means that it is collecting a lot more in premiums than it is paying out in claims.
…While everyone will soon have health insurance, is the risk simply being distributed among all Singaporeans? Will the Government take on some of the risk by subsidising premiums and removing some claim limits, as I proposed in my adjournment motion on healthcare financing last November? I look forward to some good news in this respect when the MediShield Life committee announces its recommendations.”

See here for full speech of NCMP Gerald Giam.
He asked if NCMP Gerald Giam can predict the next targeted therapy for cancer coming on the market and whether did Mr Giam know that “10years ago we will be using PET scans instead of just plain old X-rays?”.
“He makes things sound so simple and that technological breakthroughs are predictable and occur in a linear fashion.” wrote Mr Koh.
A healthcare professional whom TOC spoke to commented, For just US$7.50 a month, sign up as a subscriber on The Online Citizen Asia (and enjoy ads-free experience on our site) to support our mission to transform TOC into an alternative mainstream press.
Tags: medishield