The Straits Times report on 23 May is a piece of misleading writing. While it is not entirely untrue, it is nevertheless appalling that the Straits Times would publish it as it is.
In a report titled “Few will get Wage Credit payouts directly”, the paper said “companies have received their fist payouts from a scheme that subsidises wage increases, but most large firms are unlikely to hand the money directly to employees.”
And then it says:
“[The] Straits Times understands that many large companies are planning to channel the funds towards training and skills upgrading for staff.”
The report caused not a few people to criticise employers for not using the funds to raise employees’ salaries instead, as the Wage Credit Scheme (WCS) intends. Some also castigated the government for not having any rules for making sure that employers and companies pass the funds on to their employees.
The WCS is a government scheme which pays out – or subsidises – 40 per cent of the salary increase of an employee.
Basically, this is what it does: To qualify for the subsidy, an employer must first raise his employee’s wages, by at least S$50 monthly, before the employer qualifies for the WCS.
And according to the IRAS website, “employers do not need to apply for Wage Credit.” 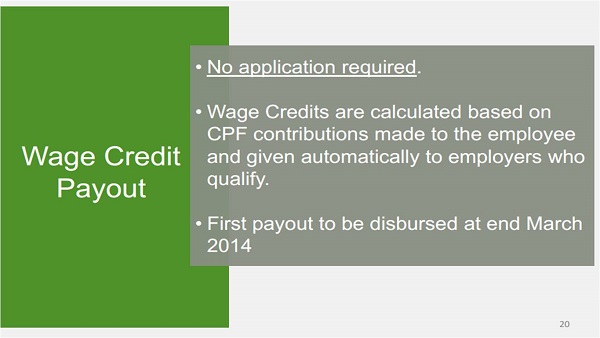 The government will compute how much credit to pay out to the employer based on the CPF contributions which the employer makes to his employees’ CPF accounts.
Here’s what the IRAS website also says: The government payout is based on the preceding years’ employee CPF contribution. For example: So, in a nutshell, this is how it works:
Employers must raise the wages of their employees first. (That’s the whole aim of the WCS.) Then government will credit 40 per cent of such increases to the employer AFTER the wages have been increased.
Govt computes this by looking at the employer’s CPF contribution into the employees’ CPF account the previous year/s.
There is thus no way an employer will be able to claim WCS without first increasing his employee’s salary.
The Straits Times report is misleading because it seems to give the impression that the 40 per cent credit from the government is meant to be given out to the employee directly.
It is not.
The employer is free to use this 40 per cent however he prefers because he has already raised his employee’s salary, which is the aim of the WCS scheme.
What seems to have confused the Straits Times is what OCBC Bank did recently, where the bank announced that it would be sharing the S$3m WCS payout it has received from the government, with its 1,500 employees.
In effect, what OCBC Bank is doing is to “double-pay” 40 per cent of the wage increase it had already given to its employees in previous years. (Which is why OCBC Bank qualified for WCS in the first place.)
But the bank is under no obligation to share this sum with its employees.
It has already fulfilled its side of the bargain in order to qualify for WCS – by raising the salaries of its employees.
It is doing so – sharing the S$3m WCS credit – out of its own volition, of its own goodwill.
So, to say that “few will get Wage Credit payouts directly”, as the Straits Times did, is misleading.
Employees had already received the “payout” in the form of a pay increase.
Further, there are no stipulations or conditions under the WCS for employers to use the payouts for specific purposes such as skills training.
Nonetheless, it is hoped that the subsidy – which will expire in 2015 – will provide companies with more options to enhance the productivity of its workers which – again hopefully – will lead to increased company capabilities, and eventually lead to a more sustainable higher wage level for its employees.
Read also Bertha Henson’s take on the matter: “Wage credit story – no credit to ST”.
Read about the WCS here: “Achieving quality growth“.