By Andrew Loh
The last time Prime Minister Lee Hsien Loong responded to a false report was on 13 April this year.
And it was not, unlike what you may be thinking, over any articles by a blogger, who seem to meet the sharp edge of Mr Lee’s unhappiness in the form of lawsuits nowadays.
Instead, Mr Lee was responding to a wrong report by the government-controlled  mainstream media, in particular the Straits Times.
The paper had reported that Mr Lee had said that a “coalition government [in Singapore was] possible in [the] future.”
Mr Lee’s alleged remarks were also carried by Channel Newsasia (CNA).
Two days later, Mr Lee posted a status update on his Facebook page to debunk the reports.
“A coalition government was not on my mind,” Mr Lee said, referring to his interview with the Financial Times (FT) from which the Straits Times and CNA seemed to have based their reports.

What is interesting is how Mr Lee chose to clear up a false report – by calmly explaining his position and what exactly it was that he said during the interview with the FT.
Few would doubt that Mr Lee’s response would be markedly different if the false reports had come from anyone else, especially the alternative and independent online media.
And indeed, Mr Lee has once again shown that his preferred response to what he perceives as wrong or untruthful online reports involving him is to send legal letters of demand, as he has done with blogger Roy Ngerng on Monday.
Mr Lee took issue with an article which Mr Ngerng had written and published on his blog, http://thehearttruths.com. The article drew comparisons between the case of the leaders of the City Harvest Church, and the Government’s management of Singaporeans’ CPF monies through its investments arms, and the CPF Board.
Mr Lee’s lawyers from Drew and Napier claim that the article “means and is understood to mean” that Mr Lee – Prime Minister and Chairman of the GIC – “is guilty of criminal misappropriation of the monies paid by Singaporeans to the CPF.”
Mr Lee is demanding Mr Ngerng removed the article, issue an apology and to pay Mr Lee compensation.
Mr Ngerng is considering his response to Mr Lee’s letter at the time of writing.
This latest incident follows two previous ones where Mr Lee had also similarly issued letters of demand.
In 2012, blogger Richard Wan apologised to Mr Lee for an article on his website http://tremeritus.com ; and in 2013, another blogger, Alex Au, also issued an apology to Mr Lee over an article about the sale of a computer system to a PAP-owned company.
These cases or incidents have raised once again the question of whether public servants should sue or threaten to sue individuals or citizens over disputed claims.
It is thus informative and worth noting how the Prime Minister, whether in his personal or official capacity, has chosen to respond to such reports in the mainstream media which it controls, and the alternative media which it does not.
Yet, the reason which the PAP government has always given for preferring lawsuits is that untruths which impugn upon its integrity or honesty must not be left unchecked.
“[We] must take accusations of dishonesty against political leaders very seriously,” Mr Lee said in July last year, when the PAP Government was accusing two of the opposition Workers’ Party (WP) MPs of “dishonesty” over the issue of the cleaning of a hawker centre.
“Good politics is first and foremost about integrity,” Mr Lee said, adding his voice to the accusation made by minister Vivian Balakrishnan. But here is where the WP’s response to such accusations differ markedly from that of the PAP.
The WP has chosen to, basically, let the people decide, and has not directly responded to Mr Lee’s or Dr Balakrishnan’s allegations.
To be sure, the WP – and indeed the opposition political parties, and especially the Singapore Democratic Party – has always met with similar accusations from the PAP.
And the Straits Times has often been at the forefront of providing front-page publicity for such allegations, as it did in the midst of the by-election in Hougang in 2012: During the PAP’s campaign led by DPM Teo Chee Hean, the WP was once again challenged to take up legal action against the PAP.
And again, the WP’s response has been to let the people decide – which they did, with a resounding voice of support, returning the WP candidate victorious with an empathic 62 per cent of the votes.
That was, on hindsight, the WP’s main goal – to win the election.
It was only after it had secured the victory that its secretary general spoke his mind about the mudslinging by the PAP during the campaign.
Mr Low told the media at a post-election press conference: 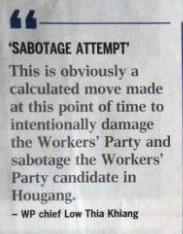 “I feel disappointed that what I see in this by—election are situations similar to what I experienced in the 1980s and 1990s, with several calculated moves to discredit the candidate and attack the Workers’ Party.
“This by—election is characterised by baseless attacks, distractions, character assassination and real threat of using government resources as carrot and stick to coerce voters from political freedom of choice. It also saddens me to see the role of mainstream media again becoming a political tool of the PAP in their election campaign.”

This victory in Hougang followed the equally heated general elections campaign in 2011 where again the WP was accused of dishonesty.
“Is it messy or are they holding back till after the elections so that whoever wins Hougang will then inherit the accounts?” the PAP candidate, Lim Hwee Hua, said then, referring to the Hougang Town Council’s financial books.
The Hougang Town Council was run by WP secretary general Low Thia Khiang then. Mr Low had been the MP for the single-member constituency since 1991.
“The Worker’s Party has always emphasised transparency and accountability of the town council,” Mrs Lim said. At a rally later, Mr Low slammed Mrs Lim for launching a “personal attack to discredit his character and capabilities.”
“Do you believe if Hougang’s accounts are messy, I can win Hougang for 20 years?” Mr Low said to the rally crowd.
The WP’s Yaw Shiin Leong, the party’s candidate in that election, won 65 per cent of the vote, one of the highest scores overall.
And in the 2013 by-election in Punggol East, the PAP seemed to have learnt its lesson and stayed away from such mudslinging.
The WP won that election too, with 55 per cent of the vote, a 10 percentage advantage over the PAP’s candidate.
In spite of all the accusations, and attempts at smearing the characters and casting doubts on the capabilities of the WP members, the WP has never once chosen to defend their names through legal threats.
Instead, they have stood their grounds, continued to diligently do their work, and let the people decide.
So, what do all these tell us?
Simply put, the PAP’s preference for legal suits to settle debates is from an era of bully-politics, where the hatchet is wielded in place of dialogue, of robust debates, and sincere engagement.
It can only come from a party which distrusts citizens and voters, who feel that the best way to win an argument or debate over any issue is to bang the table loudest, and spew forth threats through lawyers wielding letters of demand.
Yet, the signs are already there that Singaporeans can and do distinguish between smear campaigns and campaigns fought with integrity, between what is truthful and what is not.
How else did the WP win all those electoral battles?
Certainly, they couldn’t have won them through being dishonest, or through a lack of integrity?
Surely, they did not win them through hoodwinking voters?
And this is where our politics must and can move forward, instead of being stuck in the mud of the petty politics of smear campaigns over dirty ceilings, over pasar malam stalls, over upgrading programmes.
In short, we Singaporeans should be tired of such politics.
We as a people face serious challenges as we move forward – we have an ageing population to consider, a tougher economy to upkeep as we mature, a demography which is fast changing with immigration, our environment is being decimated for cheap shopping malls and condominiums, our heritage is destroyed with impugnity, and our sense of national identity has eroded instead of being cemented, even as we approach 50.
These are the very serious issues which we face and which our children will face.
And we need to have enough courage and honesty to accept debates on these things and these issues. And in the process of such debates, there will be those whose words are searing, are jarring to our ears, and who will make what we see as inappropriate remarks or comments.
But ours is not to silence through lawsuits or legal threats.
As the WP has shown, sometimes it is better to trust the people, to stay the hand reaching for the hatchet at the very first instigation, and to convince and win hearts and minds through the integrity of what you do, through debates sincerely engaged.
10 days after his inauguration as Prime Minister of Singapore, Mr Lee said in his first National Day Rally speech:

“I mean, free expression as long as you don’t get into race and religion and don’t start a riot.  It’s a signal – speak, speak your voice, be heard, take responsibility for your views and opinions.”

10 years later, Mr Lee has launched a letter of demand to three separate bloggers in each of the last three years, and in the process casting a disappointing chill over debates.

“I regret that the by—election has degenerated to this state and I’m worried because Singapore will regress politically as a society if we move into that direction.” – Low Thia Khiang, May 2012.

We Singaporeans need to choose better alternatives, in place of the anachronistic self-serving ways of old.
Leaders should be there to inspire its people, and not to silence them.