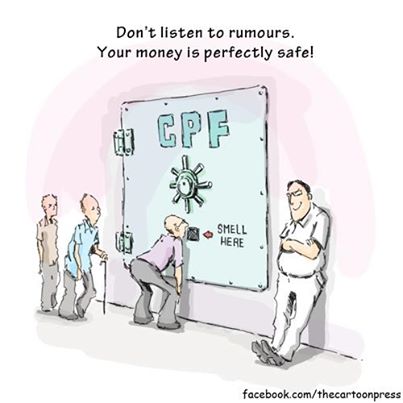 We refer to the announcement by the Ministry of Manpower and the Central Provident Fund (CPF) board that the CPF Minimum Sum will be raised to $155,000 from July 1. (press release)

The ministry goes on to explain that the Minimum Sum is increased to account for inflation, in order to maintain its real value over time.

With the increase of Minimum Sum and the Medisave Minimum Sum, one would need a total of $198,500 in the CPF account at the age of 55 this July onwards before any money can be drawn out.

The evolution of how the CPF Minimum Sum is derived

On 25th August 1986, Mr Lee Yock Suan, Acting Minister for Labour announced the CPF Minimum Sum to be set aside at age 55 is $30,000 for subsistence living after age 60 and  the scheme was implemented on 1st January 1987. He said in his speech,

The sum of $30,000 is arrived at after careful study. This amount, set aside by a member at age 55 plus interest earned, will provide him with a regular income of about $230 per month from age 60. The income will be available for about 20 years depending on the interest rate.

As inflation and rising standard of living will inevitably force up the cost of living, in time to come the $230 per month will have to be adjusted so that it continues to provide sufficient income for subsistence living. The minimum sum of $30,000 will also have to be adjusted accordingly. This figure will be reviewed every three to five years to ensure that the real value of $30,000 is retained.

The schedule of the increase is as shown in Table 1, which I understand the Clerk of Parliament has already circulated to Members. I wish to remind the House that the increase in the Minimum Sum includes adjustments for inflation over the next 10 years.

On 28th August 2003, The then Prime Minister, Goh Chok Tong made a speech on the CPF, “Returning the CPF” and touched on the issue of raising the Minimum Sum,

The CPF Minimum Sum gives CPF members a monthly payment after their retirement at age 62 a certain sum of money. It is the nest egg that will see them through their old age.

The current Minimum Sum is $80,000. Half of this can be in a property pledge. So most CPF members have only $40,000 in cash in the Minimum Sum. This will fund a monthly payment of only $252 from age 62 to 80. It is a small fraction of most workers’ last drawn pay, and is not enough for their basic needs. 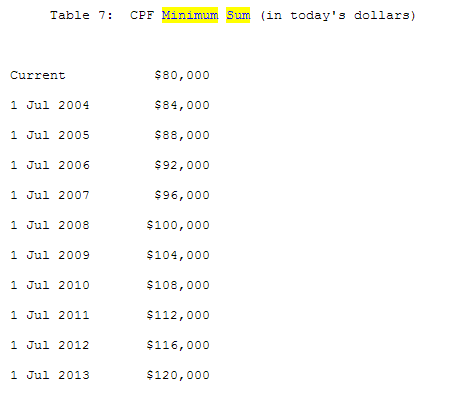 Double inflation in the adjustment of Minimum Sum

How much Minimum Sum for subsistence living

Also, since the original objective of the minimum sum of $30,000 in 1986 to provide a monthly income of $230 from age 60 for 20 years, was to provide “subsistence” living – why has the minimum sum arguably evolved to become an all encompassing retirement income scheme which only an estimated 1 out of 8 Singaporeans are able to meet at age 55.

In view of the above, I think Parliament needs to have a debate as to whether the minimum sum should adhere to its original objective of providing “subsistence” living, or a retirement income scheme which only 1 in 8 Singaporeans can meet.

PrevPreviousNewsbites – AGC vs Alex Au part two, and money matters
NextSave the Children report shows Singapore as the best place in Asia to be a motherNext
We have a small favour to ask from our supportive readers. TOC is Singapore’s longest surviving alternative media website and we are attracting new readers everyday. TOC’s independent, investigative journalism takes substantial time, money and hard work to produce. Not to mention the same amount of resources to defend ourselves from the persecution. But we soldier on because we believe in the value of our work and your right to information. TOC is editorially independent. We set out own agenda, free from commercial bias, undue influence from billionaire owners, millionaire politicians or shareholders. If everyone who reads our reporting, who likes it, helps to support it, our future would be much more secure. For as little as USD1 a month or subscribing to us, you can support our work and consequently preserve the sanctity of press freedom. We appreciate your valued help and it means more to us than you can ever imagine!