More foreigners to be police officers?

By Andrew Loh, Image credit – TODAY / Don Wong
Whether Singapore can accept foreigners as police officers is “for society to decide”, the Singapore Police Force’s (SPF) manpower director, Tan Hung Hooi, said.
Mr Tan said the “kind of numbers, as an organisation and as a society, we are prepared to take in … is something that still needs to be further deliberated on”.
He was speaking to about 200 junior college and polytechnic students at the Police Workplan Seminar on Friday.
According to a TODAY report of the event, fewer than 10 of the 200 students said they would hire foreigners for the police force if they were put in charge of recruitment.
The issue of a shortage of police officers in the SPF was raised during the Committee of Inquiry hearings in February into the Little India riot which took place last December.
During the hearings, Police Commissioner Ng Joo Hee revealed that the SPF was short of 1,000 officers, and that resources were “stretched to breaking point” in policing just the Geylang and Little India areas.
In the February sitting of Parliament, Workers’ Party chairman and Member of Parliament for Aljunied GRC, Sylvia Lim, asked the government for a detailed breakdown of the current total strength of the auxiliary police forces; and what proportion of the total strength (in percentages and in absolute numbers) comprises Singapore citizens, permanent residents (PR) and non-PR Malaysians respectively.
In his reply, however, Deputy Prime Minister and Home Affairs Minister, Teo Chee Hean, did not provide the detailed information which Ms Lim had asked for.
DPM Teo’s short reply was:

It is believed that there are 8,000 regular police officers in the SPF.
In the private security industry, besides the 6,000 auxiliary officers, there are also “35,000 unarmed security officers, out of 60,000 licensed unarmed security officers.” (MHA)
But with a growing population, the shortage of regular police officers has become a worry, one which Ms Lim has highlighted the last 8 years. (See here: “Lack of police resources – how Sylvia Lim tried to sound the alarm for 8 years.”)
She questioned if the outsourcing of police services, which has been increasing because of the manpower shortage in the SPF, would increase further, and asked if the SPF should be looking at other ways to recruit and retain officers.

“If so, where is the line to be drawn before we see the quality of functions compromised and cost-effectiveness eroded? Should the issues be dealt with not by outsourcing, but instead by allocating more resources and support for recruitment and retention to the Home Team? And instead of outsourcing with its limits, should we not focus on “best-sourcing” instead?” 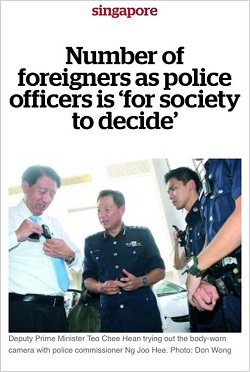 But Police Operations director Lau Peet Meng said at the Workplan forum on Friday that “diversity within the force is good to keep up with changes in society.” (TODAY)
“We need, to some extent, some sensitivity to understand our foreign population,” he said. “The danger is if it’s (purely Singaporean), you will lose touch with the people you’re policing.”
Singapore’s foreigner population has increased significantly in recent years, with the current numbers at more than 2 million, including permanent residents.
Singapore’s total population is 5.4 million.
“I think it’s very important for the police, operationally, to be aware that we do need some kind of interaction with foreigners,” Mr Lau said, “some kind of understanding and some people who actually know those communities well and are able to interact with them, connect with them … Whoever’s living in Singapore, we need to know them well in order to police them.”
With Singapore’s population projected to reach 6.9 million by 2030 and with the manpower shortage, society indeed has to decide if foreign law enforcers are the way to go. But it is unclear how exactly “society” is to “decide” on this.
UPDATE: In a Straits Times report on 3 May 2014, it said:

“The police manpower director, SAC Tan Hung Hooi, said the force already hires foreigners, but these recruits will have to become Singapore permanent residents before they can don the blue uniform.”