The Curious Case of the 7-Eleven Franchisees

By Masked Crusader
On 18 February, the Ministry of Manpower charged 22 foreign workers, all from India, for falsely declaring their salary on their work permit applications. These workers were employed by four 7-Eleven franchisees—Vina Trading, Manthra Enterprises, Magnaton Ventures and Nalla Traders.
Whilst these employees declared salaries ranging from $2,400 and $4,550, following receipt of their stated salary via GIRO (automated inter-bank transfer), they were required to return to their employers between $600 and $3,350, in cash. The actual salaries of these workers, in most cases, works out to be about a quarter of the amount declared on their work permit applications. In this scam, employers not only hire workers at dirt-cheap wages, they pay lower corporate taxes as a result of declaring higher expenses while lining their pockets with freshly laundered tax-free money. It is uncertain if the employer or the workers paid the workers’ taxes.
Since the floodgates opened to foreign workers, this has been a common scam with small businesses, HR companies specializing in foreign workers, and workers from third-world countries—where the culture of bribes and kick-backs in the job market are the norm—all colluding to defraud the government and Singaporeans. In fact, MOM acknowledges this by declaring that investigations are underway in similar cases involving 230 foreigners and as many as 75 employers. Although a certain profile of such employers and employee comes to mind, there are reports on alternative media that even some private clinics engage in this fraud in the hiring of foreign nurses or clinic assistants. Therefore, the numbers given by MOM may only scratch the surface as far as such illegal acts are concerned particularly as MOM depends primarily on whistleblowers to bring these illegalities to its attention.
Amongst the SME community, a combination of rising business costs (due to ever-increasing rents), availability of cheap regional labour, and a lax enforcement regime has contributed to the climate that makes such fraud so tempting. The MOM’s Fair Consideration Framework, which will be instituted in August this year to ensure Singaporeans are considered fairly in the job market, is likely to exacerbate rather than reduce fraud, since it will squeeze the SME further towards breaking point.
Following up on the above prosecutions, on 10 April, MOM charged eight employers, all franchisees of 7-Eleven, and two employment agents for making false declarations on 35 Employment Pass (EP) and six S Pass work permit applications. The EP is meant for foreign professionals in managerial, executive, or specialized jobs and whose salary is a minimum of $4,000. The S Pass category is for semi-skilled foreign workers such as technicians who are paid a minimum of $2,200. In addition, employers who hire workers with the S Pass are required to pay a monthly levy of between $300-$450 to the government.
The employers who were charged are from Vina Trading, Manthra Enterprises, Magnaton Ventures, Nalla Traders, Chandrani Enterprise, Niche Formulas, Changrich Enterprise, and Rui Fuels & Services. The employment agents are, ironically enough, from a company called Ethics Career Solution Pte Ltd.
The above-mentioned sets of prosecutions were reported in the local newspapers and Channel News Asia. However, the mainstream media merely regurgitated the information fed to them by the MOM via press releases which can be found here and here. Therefore, the media failed to ask the obvious follow-up questions one would expect of inquiring, analytical, and competent news organisations.
Why were there only 22 employees from four companies charged in the first instance yet, in the second set of prosecutions, there were eight companies that were brought to court for defrauding MOM on 19 more work permit applications? Why the discrepancy?
Perhaps after charging the initial group of 22 employees, MOM decided to charge the 8 employees while continuing to prepare the case against the remaining 19 employees. But it is odd nevertheless since the cases all involve 7-Eleven franchises and identical offenses.
Another curiosity is that the first press release dated 19 February identifies by name and age the 22 workers and provides detailed information on the following: work permit application date, type of work permit, declared occupation, declared monthly salary, and actual salary received. However, the eight employers and two employment agents mentioned in the 11 April media statement are only identified by their company names and their nationality—seven are Singaporeans and one is identified as a Permanent Resident. The MOM, which is often accused of having a pro-employer bias, does itself no favours by seemingly shielding employers from further embarrassment in this instance. It unnecessarily invites speculation regarding their identities and why they are being withheld. Interestingly, Vina Trading, a sole-proprietorship, which is one of the companies charged in court, was a recipient of the2013 SME One Asia Prominent Award given to “businesses which have weathered the growing pains and flourishing in their first decade of business”.
The workers who pled guilty were given fines of $5,000 to $7,000 or, if unable to pay, jailed five weeks and seven weeks respectively. In addition, the workers were permanently banned from being employed in Singapore.
In comparison, the unnamed employers, who are arguably more culpable having orchestrated the scam, were given fines of between $8,000 (or four weeks’ imprisonment in default) and $56,000 (or 42 weeks’ imprisonment). One of the employment agents was fined $22,000 (or eight weeks’ jail) and the other was fined $40,000 (or 15 weeks’ jail). The agents’ company was responsible for 21 fraudulent work permit applications.
The MOM’s 19 February charge sheet lists the following number of work pass violations by company: 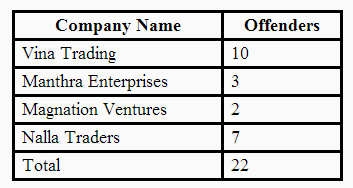 If one was to assume that the largest fine of $56,000 was given to the biggest offender, Vina Trading, then each offence works out to a fine of $5,600 each. The smallest fine of $8,000 may have been given to Magnation Ventures. This would average $4,000 per offence.
It is very hard to see how the penalties given to the 7-Eleven franchisees can possibly be construed as deterrent ones. The fines appear to be about the same or less than those received by the workers who, in addition, will never be able to work again in Singapore. Worse, if one assumes that each scam lasted an average of six months before being exposed—based on the figures in MOM’s press statement—an employer could have profited by as much as $21,000 from a single employee in kickbacks during that period seemingly making a mockery of the fines.
Perhaps the most bizarre aspect of this whole matter is that MOM processed and approved work permit applications for 7-Eleven jobs—even if they contained such job titles as “Store Manager”, “Senior Store Manager”, “Customer Service Manager” and “Business Development Manager”—that purportedly listed a salary above $4,000 a month. Are MOM officials so out of touch with reality that they did not catch a whiff of sulphur when the applications landed on their tables? Did they not wonder why these franchisees are hiring from abroad for jobs that Singaporeans would be competing for given the attractive remuneration?
It is fortunate that the mainstream press has the support of the Prime Minister who said he is unfazed by its dismal international press freedom rankings as the way media is managed “makes sense” for Singapore where “newspapers report freely the news, but also responsibly”. Because, most everyone else is rather unimpressed.
This article was first published at maskedcrusader.blogshop.sg