Recent deaths in rivers and reservoirs – cause for concern? 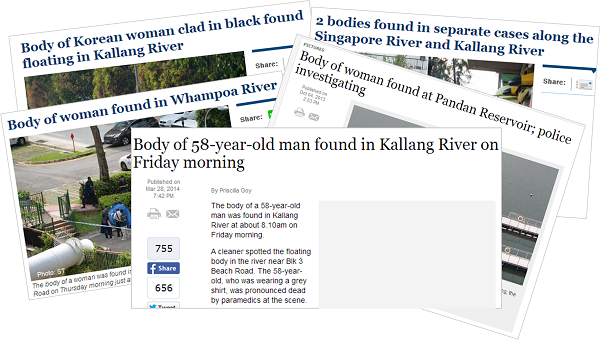 By Andrew Loh
In the last six months, there have been several cases of bodies being found in rivers and reservoirs around Singapore.
In the fourth case this year, a body was found in the Kallang River on Friday morning.
The deceased is reported to be a 58-year old man. His body was found by a cleaner, who had been alerted to the body by his boss, at about 8am.
“When civil defence officers arrived, I saw them retrieving the body from the river with their bare hands. Last month, another old man also died in the river, and I didn’t expect a similar case to happen today,” the 70-year old cleaner said. In fact, it wasn’t last month but earlier on 14 March that the body of a South Korean woman was found floating in the same river at 12.50pm. The body was clad in a black top and trousers and was also found by cleaners who were doing their rounds that day. On 2 January, two bodies were found in two separate incidents.
The body of 59-year old Lee Eng Hock was found in the Singapore River in front of The Riverwalk, at Upper Circular Road at about 4pm that day.
The deceased, who was wearing a short-sleeved shirt and a pair of bermuda shorts, was pronounced dead at the scene by SCDF officers.
On the same day the body of a younger man – believed to be about 30-years old – was found floating in the Kallang River.
The police classified both cases as unnatural deaths and are investigating. A week later, the police arrested and charged 25-year-old forklift driver, Gursharan Singh, for the murder of the woman, identified as 33-year-old Jasvinder Kaur.
Mr Singh was a S-pass holder from India.
Ms Kaur was also an Indian national who had come to Singapore on a dependent’s pass, reported the media. [See report here.] In 2011 and 2012, a spate of apparent suicides in Bedok Reservoir resulted in calls for the authorities to do more to prevent such deaths occurring there.
The public’s concern prompted the Minister for the Environment and Water Resources Vivian Balakrishnan, to assure the public that the “safety of drinking water was not compromised” by the deaths and discoveries of bodies in the reservoir.