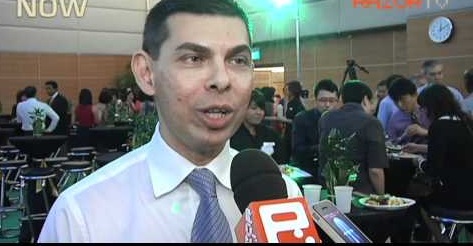 In his piece for the Straits Times over the weekend, Warren Fernandez made a pitch for Singaporeans to “go easy” on the “anti-foreigner ‘Singaporean first’ rhetoric” which he says “has become so popular these days.”
Fernandez was writing his views about the Malaysian government’s handling of the disappearance of Malaysia Airline flight MH370, which has captured the world’s attention – more than a week after it vanished seemingly into thin air, with 227 passengers and 12 staff onboard.
Fernandez’s article, titled, “MISSING MH370: A mystery, with some revelations”, offered 5 “lessons” which he said Singapore should or could learn from the MH370 incident.
Among the five “lessons” he listed is one which is about why it is important to “pick the right people… for key jobs, with the necessary skills, experience, character and temperament.”
“Finding the best people,” Fernandez writes, “must entail appointing whoever can do the job best, regardless of gender, race, age, background, or even nationality.”
He then offered this, apparently directed at Singaporeans:

“So please, let’s go easy on the anti-foreigner ‘Singaporean first’ rhetoric that has become so popular these days. Give the job to whoever will deliver when it counts.”

It is unclear which aspects of the Malaysian authorities’ handling of the incident Fernandez is referring to and which offer Singapore such “lessons” in “picking the right person” for the job.
In the past two years or so, the Singapore government has had to slow down the import or influx of foreigners because of negative consequences to the economy and to Singaporeans. By its own admission, the government also accepted that it had failed to foresee these consequences. Indeed, Prime Minister Lee Hsien Loong apologised for them during the 2011 general election and also after that.
What is also perplexing is why Fernandez, in his position as editor of the main broadsheet in Singapore, would find it appropriate to plug the government’s pro-foreigner policy by citing the unfortunate and sad incident involving flight MH370 – especially when the families of those missing are still suffering the pain of the disappearance of their loved ones.
A commenter posted on Facebook, in response to Fernandez’s article, “That was really classless on his part. There is a time and place for everything, and that most certainly wasn’t the time for that.”
Fernandez was given a “stern warning” by the police for his paper conducting an illegal by-election poll during the Punggol East by-election in 2013. And in February, his paper was again cited for “plain contempt of court” by the chairman of the Committee of Inquiry into the Little India riot when the Straits Times ran a front page article of an interview with the bus driver involved in the riot incident while the COI was ongoing.
You can read Fernandez’s article here: “MISSING MH370: A mystery, with some revelations.”
Here are the particular paragraphs in full:

3 Pick the right people: Malaysia has been much maligned for its handling of the crisis, suffering untold harm to its international reputation.
I don’t wish to add fuel to the fire. But the lesson to be drawn is the importance of ensuring that the right people are picked for key jobs, with the necessary skills, experience, character and temperament.
Such decisions should turn on more than just good grades, fancy degrees, or the right connections. Grit, groundedness and good sense should count as much. Finding the best people must entail appointing whoever can do the job best, regardless of gender, race, age, background, or even nationality.
So please, let’s go easy on the anti-foreigner “Singaporean first” rhetoric that has become so popular these days. Give the job to whoever will deliver when it counts.