COI Week 1 – The hearings so far After the first week of the Community of Inquiry (COI) hearings into the Little India riot, several main points seem to have emerged.
Before we get into that, however, it is prudent to revisit the Terms of Reference which the COI has been given. The terms are:

a. Establish the factors and circumstances that led to the riot in Little India on 8 December 2013.
b. Establish how the riot unfolded and how the response forces managed the incident.
c. Consider whether current measures to manage such incidents in areas where foreign workers congregate such as Little India are adequate, and recommend any further measures to improve their management and reduce the risk of such incidents.
d. Conduct itself in accordance with the provisions of the Inquiries Act.
e. Make and submit a report of its proceedings, findings and recommendations to the Minister for Home Affairs within six months.

“The COI is required by law to focus solely on its Terms of Reference (TOR), and is prohibited from determining the civil or criminal liability of any person.”

Now that this is clear, let’s take a look at some of the main points raised at the COI so far, which could have contributed to the eventual riot.
Timekeeper – Grace Wong Geck Woon Contrary to what initial news reports may have reported, and also contrary to what Ms Wong herself denied in court, the COI heard from several auxiliary police officers that she had been verbally abusive towards the workers, and had raised her voice at Mr Sakthivel Kumaravelu prior to his death that night.
The only bus passenger to give testimony at the COI questioned why Sakthivel Kumaravelu was asked to alight from the bus, since he was already on it. If he hadn’t been asked to alight, he wouldn’t have died, he said.
Bus driver – Lee Kim Huat
For the first time, the COI heard that Mr Lee had not turned on the two monitors on his bus on the night. Thus, even though the five cameras in his bus were working, Mr Lee could not and would not have seen Mr Sakthivel Kumaravelu walking and running beside his bus, just moments before he was run over by the bus driven by Mr Lee.

Sakthivel Kumaravelu – unruly
From the testimonies so far, the only “unruly” occasion involving Mr Sakthivel Kumaravelu was when he asked several people, who were waiting in line for the bus, whether Bangladeshis were better than Indians. The video shown of him in the bus did not seem to suggest he was unruly. In fact, when he was asked to alight by Ms Wong, he did so calmly and voluntarily.
[spacer style=”1″ icon=”none”]
First responders – SCDF

The SCDF team, under the charge of Lt Tiffany Neo, performed almost flawlessly, from its arrival on the scene, to the extrication of the deceased from under the bus – which took only 11 minutes – and its rescue of Ms Wong and Mr Lee. Perhaps the only incident the team was involved in which could have inflamed the crowd was when the team had to place the body of the deceased on the floor, when the paramedics from the private ambulance refused to accept the body because of protocol. This, however, was only for a short time and Lt Neo had ordered the ambulance to let the body be placed in it. 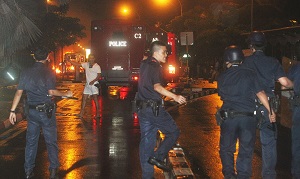 The main target of criticism of the COI so far seems to be the Singapore Police Force (SPF), with the COI members, particularly its chairman, GP Selvam, and Tee Tua Ba, having some stinging remarks directed at them.
18 minutes to approve request: The COI questioned the 18 minutes it took for the initial request for special operations command (SOC) assistance from Lieutenant Johnathan Tang to be approved. It also queried why, of those 18 minutes, 12 were because Deputy Assistant Commissioner, Koh Wei Keong, the 2nd Deputy Director of Operations that night, wanted do his “due diligence” by consulting various other officers to be sure that activation of the SOC was required.
Failure of communications: On the night, police communications failed, leaving the ground troops mostly to themselves. It was revealed that the police officers on the ground were not aware of the other police officers in the area.
Lack of training: Officer after officer at the COI testified that they had received no training in managing large crowds, especially violent ones, such as a riot. It was also revealed that they had inadequate equipment for such purposes – they had no loudhailers with them, for example; or long batons. 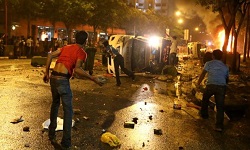 No show of force: COI members were particularly scathing in their criticisms of the police’s lack of a show of force in the initial stages of the violent unrest. They also suggested that the security forces fleeing the ambulances could have emboldened the rioters, and encouraged them to resort to even more violent behaviour, such as setting security vehicles on fire.
Selvam emphasize  the fact that no policemen were seen around the area. He kept asking the witnesses in court if they had seen any other policemen around the area.

SOC delayed: The COI heard how the SOC had had to make two u-turns on its way to the scene of the riot in Race Course Road. While on its way on Bukit Timah Road and was about to turn into Race Course Road, the SOC team was ordered to turn around and to rendezvous at Hampshire Road instead.
When it reached Kampong Java Road, the troops were caught in a traffic jam. After 20 minutes of waiting, three of its vehicles were ordered to make a u-turn and return to Bukit Timah Road, to get to Race Course Road, where the riot was taking place.
By then, the riot had already been in full swing, with many security vehicles in flame. 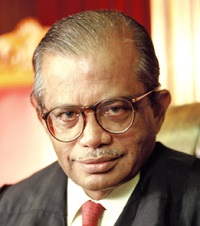 Poor Judgement, wrong command: The most scathing criticism of the police came from COI chairman, GP Selvam. He described it as “poor judgement, wrong command” when the police made the decision for its troops to withdraw to several exit points to “hold the line”, while they awaited the arrival of the SOC.
It was “poor judgement” to make such a decision as it gave the rioters the impression that what they were doing was alright.  “[The rioters] had full freedom to do what they wanted – namely, to burn the bus, burn the vehicles, attack you,” the former judge said.
Alcohol: The testimonies heard at the COI thus far have not focused on alcohol, although it has been mentioned several times, but almost in passing.
No arrests: The one-week hearings at the COI so far has not revealed any arrests of the actual rioters who set vehicles on fire, or who threw projectiles at the security personnel and vehicles. When several auxiliary and police officers were asked if they had arrested anyone during the riot, their answer was no, except for one auxiliary policeman who reported that he had arrested four of the rioters and had handed them over to the police. However, he is unsure if the police had taken the four men into custody then.
Most of the arrests so far seem to have been effected after the riot had died down, and most of these arrests – 27 that night – seemed to have been made by the SOC or plainclothes policemen.
25 were initially charged for rioting. 3 have so far pleaded guilty – after their charge of rioting was changed to “failure to disperse.”
No one has yet been found guilty of the charge of rioting thus far.