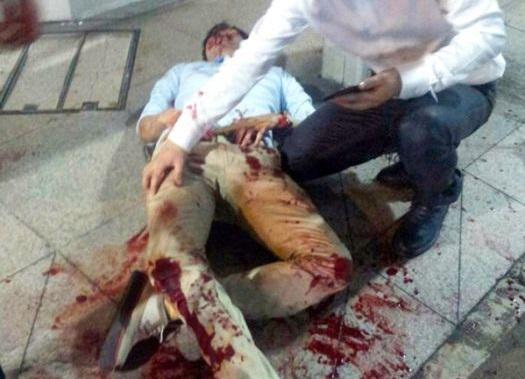 In what the police described as a case of “rioting”, a group of Koreans was set upon by another group of local men last Friday.
The Koreans were apparently attacked outside Hotel Rendezvous along Bras Basah Road on Jan 31 at about 4.40am.
The men were out clubbing at the newly opened Club Password, which features Taiwanese and Korean performers, located in the hotel.
One of the Korean performers took an interest in one of the Korean men and hugged him, apparently angering another table of local men, the news reported.
According to a Chinese newspaper report, it is believed that the local group “started flipping tables and a shoving match between both groups ensued.”
The Korean men, wanting to avoid further trouble, were said to then leave the club. However, the local group of about 10 men followed them.
The Korean group was then set upon as they waited at a taxi stand outside the hotel. It is reported that the weapons used by the local group were metal poles and beer mugs apparently taken from the club.
Three of the Koreans were sent to the hospital with injuries, which included one person with a fractured skull.
The police have classified the case as rioting and said investigations are ongoing.
In other recent but separate cases involving Koreans and foreigners in Singapore:
In June 2012, a 30-year-old Korean man, who lost his temper and beat up a taxi driver outside a hotel in Pasir Panjang, until the cab driver was unconscious. [See here.] In September the same year, another Korean man, who was in a taxi, was reported to be drunk and became violent when he was asked to put on his seat belt. He was also reported to have assaulted a passerby who had come to the aid of the driver. He was later arrested for disorderly behaviour. [See here.] And in 2010, a group of Caucasian men beat up 2 Singaporeans in a brawl at Suntec City. 2 of the men eventually fled, while the other was arrested and jailed. One of those who fled eventually surrendered himself, while the 3rd is still at large. [See here.]