By Andrew Low
The Job Vacancies 2013 report by the Ministry of Manpower (MOM), released on Monday, showed that job vacancies rose by 9.7 per cent, to 61,900, in September 2013.
Leading the list were jobs in the services sector, which made up some 80 per cent of the vacancies.
“Services continued to generate the bulk of job openings, making up four in five of all vacancies in 2013, mainly in community, social & personal services, accommodation & food services, wholesale & retail trade and administrative & support services,” the MOM report said. This is in line with an NUS study last year which revealed that “90 per cent of the one million jobs created in the last decade are from the services sector.” [See here.] However, these jobs are said to be shunned by Singaporeans. The reasons for this, MOM says, include unattractive pay, physical demands of the jobs, shift work and non-conducive working environment. Unattractive pay was also what the NUS study found – that these jobs are lowly paid, and that in fact “85 per cent” of those surveyed “said these jobs are not paying enough for them to support a family.”
Of the job openings which are unfilled, two-thirds were cited by employers as being shunned by Singaporeans.
Employers surveyed by MOM said that they had difficulties finding Singaporeans to fill nine out of 10 vacancies for jobs in the service sector, such as waiters, cooks, security guards, and cashiers.
As the government continues to tighten the inflow of foreign labour, businesses are expected to continue to face a labour shortage crunch, which may add pressure on the government to ease the tightening. However, economists do not think that the government will do so, as its drive to increase productivity among the workforce continues.
“Pointing to the new malls springing up across the island, CIMB economist Song Seng Wun said each shopping centre, for instance, would require a gamut of workers such as security guards, maintenance crew, cleaners and shop assistants,” the TODAY report said.
With more shopping malls and entertainment outlets in the pipeline, businesses themselves may be pressured to raise salaries.
But raising salaries without a corresponding rise in productivity is “dangerous”, according to Prime Minister Lee Hsien Loong in 2012.
In his May Day message then, amidst calls for higher salaries for Singaporean workers, he cautioned against merely relying on the government’s tightening the supply of foreign workers to achieve better salaries.
“Business costs would go up, affecting Singapore’s competitiveness, and inflation could rise,” the Straits Times reported him as having said.
‘It would be dangerous to assume complacently that wages can continue to rise indefinitely, just by our squeezing on foreign workers,’ PM Lee said. 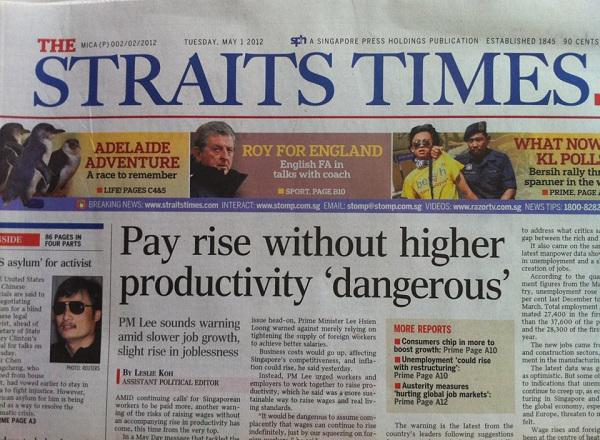 And while the government is “moderating” the flow of foreign workers, PM Lee said “this will hold back many companies that are eager to expand, but cannot find enough workers. Some may even relocate their operations out of Singapore.”
He maintained that raising productivity is the more sustainable way to raise wages, even though the tight labour market may push up wages temporarily.
“Raising our productivity will benefit workers, firms, and our economy as a whole,” Mr Lee said. “Workers can earn more in higher-quality jobs. Firms can prosper and expand their businesses here. Our economy can continue to thrive despite more intense global competition.”
The government has also introduced a slew of help schemes for companies and businesses in a bid to help them raise productivity.
Deputy Prime Minister and Finance Minister Tharman Shanmugaratnam indicated last week that the Budget this year will provide more help for small and medium enterprises, which employs the bulk of the workforce, in this respect. It will be a continuation of government measures introduced in the 2013 Budget which also focused on providing help to SMEs.
“To help businesses,” the Straits Times reported, “the Government will provide support through both broad-based schemes like the Productivity and Innovation Credit as well as industry specific schemes. It will work with industry associations and individual firms to help companies invest in technology and their supply chains as well as provide assistance to enable large firms to help small firms.”
Mr Tharman said that the drive to improve productivity is already bearing fruit and that “wages are rising”.
Still, the proportion of openings hard to fill by locals remained unchanged from a year ago at 66%, the MOM report says. Will higher wages attract Singaporeans to these jobs? It is left to be seen, but it is also worth paying attention to the other reasons why these jobs are being shunned – physical demands of the jobs, shift work and non-conducive working environment.