The PTC should stand with commuters on fare issue This Thursday, the Public Transport Council (PTC) will announce its decision on whether the fare revision application from the public transport operators (PTOs) is approved.
To most Singaporeans, the decision is almost a done deal. This is even more certain given that the Transport Minister on Monday said the government is ready with help schemes for needy.
“I told him [PTC chairman, Gerard Ee] that the Government was ready with our package for the low income workers (LIW) and persons with disabilities (PWD) and that we would like to announce this together on Thursday,” Mr Lui said. “These two concession schemes will be fully funded by the Government.”
Mr Lui’s remarks, made on his Facebook page, [click here] immediately drew angry responses from the public. Most of the 158 comments, at the time of writing, were directed at how unfair it would be for fares to be raised, given that in the last few years service was below par.
Nur Azlinawaty Abdul Rahman wrote: “Dear Mr Lui, major improvements in service on every level, ranging from the timeliness to condition of the public transport, are needed and should be above par (and not on par) before any price increase is warranted.”
Jeremy Speaks said: “Breakdowns are still happening, and are we going to take that as a norm from now on? Please, don’t reward a private transport company which keeps earning good profits yet performs poorly in both capacity and frequency.”
“This must be the only place on this planet where prices go up despite deterioration in service standards,” Riduwan Matni posted on Lui’s page. “While management gurus advocate increase in profits from improved customer service, seems like this Government actually teaches the very opposite – profits of supposed private company can be fattened, at public coffers expense, while service standards is lackadaisical at best.”
Indeed, service standards of the trains, especially, have been below expectations, with breakdowns now a common and regular occurrence. What has added to the anger among the commuting public is also the fact that the government last year announced a S$1.1 billion handout to the PTOs to purchase 800 buses and also for their maintenance over the next 10 years. And just last week, the Transport Minister also announced a new “stick-and-carrot” reward scheme where the PTOs could be rewarded more substantially – up to S$6,000 – if their buses arrived earlier at their destinations. Singaporeans saw this as an unfair reward for the PTOs for doing what they should be doing in the first place.
A quick glance back to the last three years shows why Singaporeans are so upset with the expected fare increase. In 2011, the trains were so packed that during one of the breakdowns, a commuter had to break the glass windows in order for air to enter into the cabin. In 2012, breakdowns led to long queues for buses for the thousands who were affected. 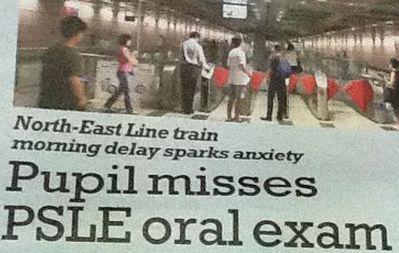 The disruptions continued into 2013…

Pictured above are commuters squeezing into the train at Jurong East station. Fire broke out at the Newton station in February last year. At the NEL line… 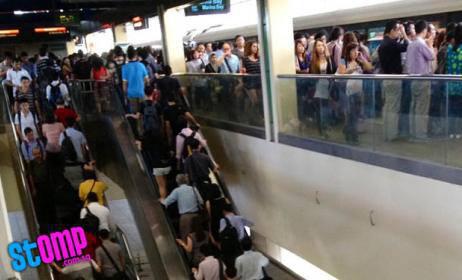 One does not know when all these disruptions will end, or if they ever will.
But it is clear to most people that it would be totally unfair and indeed irresponsible for the PTC to approve any fare hikes for the PTOs – given that the government has provided them S$1.1 billion of taxpayers’ money and that the PTOs themselves are making very healthy profits every year running into the hundreds of millions of dollars.
In short, Singaporeans and the commuting public want to see the PTC do the right thing – to grow a spine and dismiss the PTOs’ application to hike fares.
It really is time for the PTC to listen to the public.
“I think Singapore is the only country in the world where the government comes out to speak up for ‘private’ listed companies and ensure that their profits are protected,” said Keniro Piongiro on Lui’s page.
It is high time the PTC stood with commuters and reject the fare hike applications by the PTOs.
*Special thanks to Lovecraft RavenEve for the pictures.

MDA “looking into” new website by former editor of TRS