Some of Murdoch University’s top researchers will lead a project aimed at enhancing productivity and innovation in Singapore’s manufacturing industry.
Work will begin early this year on a 12 month benchmarking study, with SGD$529,000 awarded to Murdoch by the Singapore Government through the Singapore Innovation and Productivity Institute.
“Singapore is currently in a period of low productivity growth, compared to other developed nations,” said Murdoch University’s Singapore Dean Associate Professor Peter Waring.
“The Singapore Government has identified this as its most important economic priority as it wishes to remain competitive internationally.” Read the rest [link]

[spacer style=”1″ icon=”none”] Perhaps I’m too new to Australia to appreciate their level of innovation in manufacturing. The company I am working for is using almost pre-historic equipment to produce and we are constantly begging the boss in Asia to get provide us one of those state-of-the-art machines they are using in Singapore and Malaysia. Of course, I understand that my company is not a good representation of the Australia manufacturing industry. Still, are the manufacturing industries Australia particularly productive and innovative such that Singapore should fork out half a million bucks to research on? Didn’t the Straits Times and the PAP government repeatedly tell Singaporeans that the “White Thrash” were too lazy, unproductive and it would be dire to learn from their ways?
So something has changed since then?
My first thought was why Australia and not Germany or even Korea? Only our government can answer that, I suppose. I can’t help but laugh when I read the second last paragraph of the article which goes like this, “Singaporeans are already looking to Australia for its innovative practices, notably in the construction industry.”
Oh right. So we are talking.
If the Singapore government is interested in improving construction standards and innovation, there is nowhere better to look than Japan. And by that I don’t mean the Japanese main contractors in Singapore. It is widely accepted that the Japanese run their construction projects with the most efficient, clean and safe methods. I think that is the way to go.
Truth to be told, I’m secretly delighted that some government body actually realised that our standard of our construction industry in Singapore is, for want of a better word, third world. I might not have been in the construction industry for a long time but I had seen enough examples from people of all levels – be it business owners, construction managers, project engineers or site supervisors – regard the mother of all construction solutions to be “put more people.” I.e. to spam the project with as many foreign workers on the job as possible to finish the projects in the shortest possible time. 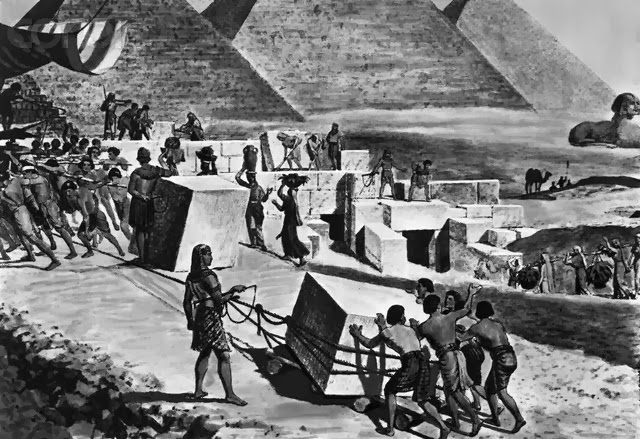 I apologise for using an illustration of the Egyptians using Jewish slaves to build their ancient buildings. That would be an insult to their amazing engineering that stood the test of time. Unlike the masterwork of the Egyptians, the recent projects in Singapore were completed by flogging the dead horse and had been in shambles in terms of quality. Just look at the Downtown Line, leaky new structures everywhere and things going out of operation. In terms of labour resource management, it was as good as modern slavery. I believe I do not need to elaborate on this. I had seen it with my own eyes during my A&A project in NUS AS2 building. Foreign workers, being paid on $2 per hour were sent in by the doves by a competitor contractor to finish the job quickly late one evening, away from public eye and where safety officials were more ‘relaxed’. The foreign workers carried chunky steel channels by hand, sometimes 8 of them together to lift a heavy one like how the older Singaporean sons did their log PT during National Service. I asked the manager of that team why he chose to do that instead of hiring a crane to do the job. His reply was,

As our project was on the roof of level 5, 6 and 7 of the Arts and Social Science Block 2 building, we needed at least a 150 tonnes crane in order to stretch its boom to reach level 7 from the nearest ground safe enough for a crane set up. That was probably a classic situation of construction innovation. Innovation? Is there any incentive to do that where there is an easier way out between a business owner and the bank? In our case, spamming 50 workers on the roof appeared to be one. Can you beat 50 workers with innovation to paint a house or to sweep up the streets? Not when they cost $100 an hour. It would cost the Australian boss $1000/hour to hire 50 labourers or $2000-3000/hour to hire 50 tradesmen. Do you understand the secrets of innovation now, Singapore government?
Innovation is a motivation. It is not a talent exclusive to any race or nationality. Even Singaporeans, who are known to be rigid in the mind due to our education system, can innovate. Before the government spends half a million bucks, they should understand the philosophies behind motivations of innovation. Some say necessity or laziness is the mother of all inventions. I think there is wisdom in these sayings. If the Aussies have excess to a $2 per hour labour pool, would I still witness so often here how entire workshop steel structure were constructed by only 2 tradesmen, a mobile crane, a forklift and a boom lift?
Truth to be told, there is very little we can do to emulate the Aussie way of construction. By making the grave mistake of forcing out the skilled tradesmen during our fathers’ generation, we have lost a full generation of know-hows and skillful hands that education will never replace in a short 1-2 decades. The government was too casual in approaching this matter and thought that cheap foreign workers were a viable solution for the long term. Perhaps they are slowly beginning to see light to the folly of their ways. Who knows, that $529,000 may just go down the drain after the officials found the studies unimpressive and “irrelevant” solutions to Singapore’s needs. We’ll never know. Does anyone in Singapore know we spent this money in the first place?
This article was first published in Nix’s blog at “A Singaporean in Australia“.