By Andrew Loh
In the front page of the Straits Times on 08 January 2014, it reported what has been a perennial problem faced by our public hospitals – shortage of beds for patients.
The ST report, titled “Hospitals facing severe bed crunch take unusual steps”, it said these hospitals were housing patients in “tents and corridors” or were sending them to other hospitals.
It said Changi General Hospital (CGH), for example, is “housing patients waiting for beds in a large air-conditioned tent”.

Tan Tock Seng hospital, on the other hand, “has been forced to set up 49 beds along the corridors of its wards to cope with the demand” for beds.
This is not new for TTSH.
In 2010 and 2012, demand for beds was so high that it was also forced to put patients in corridors while they waited for the beds to be available.
In the Straits Times report, CGH’s chief executive officer, Dr Lee Chien Earn, was reported to have said: “Our bed occupancy rate has crossed 100 per cent for certain periods over the past month and some patients have waited for more than 24 hours for an inpatient bed.”
The crunch in hospital beds is not anything new. It goes as far back as 2008.
[Read this article published in The Online Citizen of this writer’s experience when accompanying his friend to be admitted to the Singapore General Hospital: “A 28-hour wait for a bed at the Singapore General Hospital.”] Anecdotal evidence from ordinary Singaporeans also relate how such a shortage of hospital beds has been a problem for several years now, as in this article by Alex Au in 2010: “Bed crunch continues even as new hospital opens”.
It is thus puzzling to hear PAP MP for Tanjong Pagar GRC, Dr Chia Shi Lu, dismiss the shortage, and ascribe it to the “holiday season”.
The Straits Times reported:
“Dr Chia Shi Lu, a member of the Government Parliamentary Committee for Health, suggested that the crunch might be due to the holiday season rather than a spike in illnesses.”

Dr Chia’s remarks are puzzling for the simple reason that the bed crunch is not a seasonal thing, happening only during the holiday season.
In fact, in the past few years, news reports have highlighted the problem regularly.
In 2010: 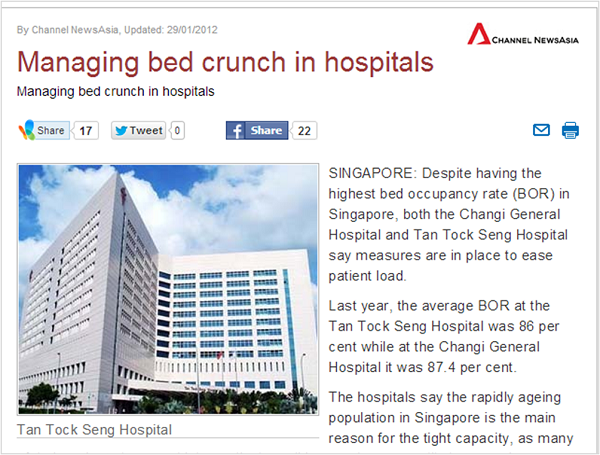 None of these reports seem to have ascribed the shortages to the “holiday season”. In fact, shortage of beds seems to occur at all times of the year.
The reasons for the shortfall according to these reports, however, are several: an ageing population, a larger foreigner population, and even the presence of medical tourists, all competing for resources.
For example, in 2010, CGH’s then CEO said: “The population in the east has been increasing. When we built this hospital, it was targeted to have a population of about 900,000. Today, we’ve already exceeded 1.4 million. By 2020, we are looking at about 1.8 million in this part of the island.”
The shortage in earlier years may have also been exacerbated by the government’s decision to change its plans to build new hospitals in 2010.
The Straits Times reported then:

“The bed crunch is a result of several factors, including an older and larger population and the delay in building a new hospital.
“In 2004, the Government decided to scrap a planned 650-bed hospital in Jurong – which was scheduled to open in 2006 – in favour of the Khoo Teck Puat Hospital (KTPH) in Yishun.
“This delayed the addition of the much-needed beds. But a new hospital will now be built at a different location in Jurong, and is scheduled for completion in 2014.
“Meanwhile, hospitals contacted said they are groaning under the weight of high occupancy rates.”

In fact then Health Minister Khaw Boon Wan admitted the government’s failings. “In hindsight, we should have started building KTPH two years earlier,” he said then, and added, “I am determined not to repeat this mistake in the west.”
Indeed, 4 months later, Mr Khaw reiterated that “Singapore will not be caught out by a shortage of hospital beds again.”
Unfortunately, however, it seems we are in fact being “caught out” by the shortage of hospital beds again – holiday season or not.
[Read this personal account by Alex Au: “Hospital bed supply trailing far behind increase in elderly numbers”.] This letter in the Straits Times forum page may give us some clue on the possible reasons for the bed crunch: