Hands Off Cockburn! – What Singaporeans can Learn from the Aussies 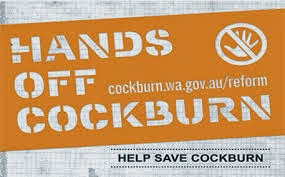 I work in the south-western region of metropolitian Perth. So it is an everyday thing to drive past through the City of Cockburn. Lately I spotted some curious signage all over the city that cried, “Hands off Cockburn!” Many of these signage were not professionally made. Some were even handwritten and erected casually by the side of the road. However, the messages on these were far from casual and I could feel the messengers were dead serious about that.The protestants were residents of Cockburn. (pronounced as Ko-burn, in case you have a picture of a charred dick in your mind) They were protesting against the state government’s intention to break up the City of Cockburn and merge the northern and southern parts to the City of Melville and Kwinana respectively. My curiosity with the random signs led me to do a brief read up online and learnt that the Cockburn community actually held a protest outside the Parliament House last month to have their voices heard: They did not want their City to be carved up and given to other councils.

At the rally, the Cockburn community submitted its own proposal, (I will spare you the details) along with almost 11,000 signatures from the electors showing the community support for their proposals. What impressed me was the committee behind this only took ten days to come out with a 100-page proposal and manage to amass close to 11,000 people to support it. Quite a feat, if you think about how logistically challenged it is for them to do so as compared to our situation in Singapore. That only tells me one thing, the community spirit is very strong over here, much like the Kampong Spirit that used to exist many pockets of Singapore.

These protestants would be arrested by the police if they had done that in Singapore. One would wonder why. Did the protest (shown above) look like a Little India riot to you? Were the protestants violent or disorder? No. Did they cause public inconveniences? No. The most important question Singaporeans should think about, do we have a right to voice out against decisions of the government that we do not agree with? The community of Cockburn had it and did it. Whether or not their proposal would be accepted later was inconsequential to me (but obviously not to them) because I felt the whole thing was a new experience, a new sensation to me altogether. It made me feel the place was actually alive, not the boring Perth that Singaporeans love to assume. It made me feel that people here are living things who care about the people, community groups, nature and identity around them unlike the absolute apathy that I used to experience in “vibrant Singapore.”
I wrote this not to condone protests or encourage people to become dissidents but to highlight the importance of having passionate close knitted communities in Singapore. In an environment where the government tells the people regularly to “take care of ourselves”, my point couldn’t be emphasize enough. Unfortunately, our community spirit is fast dwindling. Think about it, if we cannot even be attached to our surroundings or take pride in our community identity, how will the future generation be take pride in their country?
If you want proof that the people don’t give a damn what happens to their constituencies, just look for anyone who gave a damn when the GRCs of Cheng San or Eunos were broken up to combine with the other GRCs or wards. Most of us didn’t even understand the impact of these arrangements. Will the residents of Potong Pasir voice their unhappiness (if any) when they become part of a GRC in the next elections? To us, a constituency border is just a boundary line on the map, only applicable during the General Elections. Besides, what can we do about it? Protest like the Cockburn residents? I am not sure at all Singaporeans would bother to do so even if protesting is made legal in Singapore. It isn’t about protesting, it is about whether we even care or not. We don’t and probably never will.
Perhaps the system was designed with the purpose of segregating the people so that power can be eternally maintained since the divided can be easily conquered., combined with the constant emphasis on materialism, so that the people would focus solely on material pursuits and be useful economic numbers in their entire life span. What an amazing model. Such brilliance. But life is so cruel for the people who woke.
This article was first published in http://asingaporeanson.blogspot.sg