Back in July, blogger Ravi Philemon had his name dragged through the mud by ministers and the government-controlled local media for re-posting what a friend had said to him about the distribution of N95 masks. July was when Singapore was experiencing its worst case of the haze from Indonesia.

Mr Philemon’s re-post on Facebook questioned if the masks would be made available to the general public, as the government had promised.

What happened next was one of the most vicious attempts by both the government and its media to demonise Mr Philemon. The Minister for Communications and Information, Dr Yaacob Ibrahim, even went to Parliament and singled out Mr Philemon for special mention, even though Mr Philemon had no opportunity to defend himself in the House.

He was accused of spreading falsehoods which had the potential to cause “panic” among the public. The attacks on him lasted for more than a week, with his name and picture splashed across several newspapers. In effect, he was being made to be the devil incarnate himself.

All this, mind you, from a Facebook post which was only shared some 23 times, and which had 27 “likes”.

Nevermind that this made no sense whatsoever.

What then would you say about a post containing false news by Channel News Asia (CNA) which attracted more than 30,000 “likes” and more than 3,000 “shares”?

Nothing of course, as far as those like Mr Yaacob are concerned. They have breathed not a word about this. And yet this piece of false news was not only carried by CNA – it was also carried by the Straits Times and TODAY as well: What is interesting is how the Straits Times explained this false report.

It said, with reference to the interview the media had with Mr Govindarasu:

“[By] the end of the interview, as questions were raised over the authenticity of several points in the account, he denied that he was the hero as was filmed.” [See here.]

It would seem that the Straits Times, TODAY and CNA all went to town with the false news even before they had completed their interview with Mr Govindarasu, or before they had ascertained and confirmed the fact that he was indeed the so-called “hero” who tried to stop the violence last Sunday.

That really says it all about the mainstream media’s lack of professionalism and journalistic integrity.

Breaking the news is of top priority – even over fact and truth.

“The reporters also ran his picture by the time-keeper to verify whether he was the person everyone was looking for. Yes, quite possibly we should have waited for the time-keeper’s id before publishing the initial story, but that’s first-to-publish competition for you…”

Of course, one could say that mis-identifying Mr Govindarasu as the so-called Good Samaritan is not as serious as propagating “falsehoods” about N95 masks.

But the problem is that putting out fake news about Mr Govindarasu was not the only false news or information which the mainstream media had published insofar as the riot in Little India is concerned.

For example, TODAY misreported that Little India was proclaimed an area under the Public Order Act for one month:

It prompted the Singapore Police to make a correction:

Imagine what that would have done to businesses in that area, for example. They would have been alarmed to hear of such news.

Commenting on what he called “extreme views posted online”, the Acting Manpower Minister, Tan Chuan Jin, cited the rumours online that “people were killed, policemen were killed” to again castigate the online community.

“[The] allegations that people were killed, policemen were killed. Can you imagine the impact on the families, children whose fathers or mothers may be on the line and the number of hours of anxiety that you have just created because you deliberately created false news?”

Unfortunately, Mr Tan did not seem to be talking about the false news report put out by the government media when news of the death of a person in the riot first emerged.

Channel News Asia reported that the person killed was a Bangladeshi – and this piece of news apparently went out all over the world:

Here, it is reported by The Guardian in the UK: It was also carried by The Huffington Post in the US:

The Straits Times reported the same piece of false news:

The wrong report prompted a somewhat angry rebuttal from the Bangladeshi High Commissioner who said the news report “is not based on facts”. It seems that the local media outlets were competing to see who could put out the fastest breaking piece of news, as Mr Feng said, as they seemed to have done with the mis-identification of Mr Govindarasu as the Good Samaritan, without checking their facts.

Indeed, fact checking seemed to have been relegated out of the priority list.

One wonders what Mr Tan thinks of this – how such reporting have caused “the number of hours of anxiety” that the mainstream media have created for the families and loved ones of the hundreds of thousands of Bangladeshis “because you deliberately created false news.”

Again, of course, there is still no criticism of the mainstream media by any government ministers.

Or a single apology from any of the local mainstream news outlets.

False news aside, even the speculations by the local mainstream news outlets contradict each other.

Here is one example:

According to these seemingly different accounts in the Straits Times and The New Paper, the bus which killed Mr Sakthivel Kumaravelu had reversed into him – after the bus had “moved off and made a left turn”. But there has been no police report or accounts which confirmed that this happened – that the bus, at some point, had “reversed” into Mr Sakthivel after having “moved off”.

And the media propagated speculations by others as well.

The first government comments on the riot, ironically, included those which called for the public not to speculate or to believe in speculation.

Deputy Prime Minister Teo Chee Hean himself, at the start of the press conference with the Singapore Police, urged members of the public “not to react to any speculation and let the facts be established.”

At the end of that conference, DPM Teo repeated his call, and said that “it is really not appropriate to speculate on causes and actual events, because police are conducting an investigation at this point in time.”

Unfortunately, DPM Teo’s call seemed not to have been heeded by his own ministers and his government’s own media.

Right from the get-go, ministers speculated on the cause of the riots – and the finger was firmly pointed at the presence and consumption of alcohol among the foreign workers in Little India last Sunday. 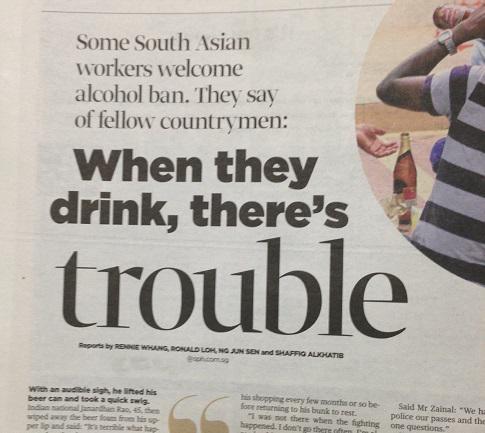 But what are the facts? It is this, as the police itself said at it press conference to address questions of the riot:

The truth is that not a single minister has provided any form of substantiation to back up their insinuations or claims that alcohol played a part or played a big part or was the main cause of the riot.

What does that tell you?

The past weeks have seen minister after minister, including the Prime Minister, taking cheap pot shots in blasting the online community and online media for basically being irresponsible.

But, as this Little India episode shows, it is the mainstream media – and government ministers – who have been indulging themselves in falsehoods and in speculations.

And yes, compare all these mis-reporting, falsehoods and speculations to the one single Facebook post by Mr Philemon in July – and how the government wailed and flailed, and went to town like some drunkards screaming bloody murder over that single post.

I think it’s about time the government recognised, with honesty, the sub-standards of its mouthpieces, and allow some competition to it – instead of mollycoddling it.

Otherwise, in the end, it is the government which will lose credibility because of the low standards of its main mouthpieces.

And oh, here is another recent example of mis-identification by the mainstream media:Mainstream media having a field day naming wrong people.