This might be perceived as the result of the online furor over what is perceived to be character assassination on Nicole Seah as well as her two facebook posts which exclaimed that the reports by the two newspaper are examples of gutter journalism.

Asiaone was the first to issue an apology on their website on 28th November to Nicole Seah. Followed by Lianhe Wanbao with their apology on its website on the same day 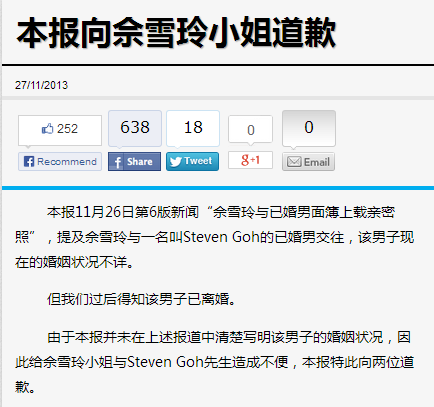 After the two apologies have been made, Nicole Seah said that she was still waiting for a corrected version in the print edition of Wanbao and a formal public apology that she had requested from the newspaper. Failing which she is fully prepared to take legal action against the Singapore Press Holdings.

On 29th November, Lianhe Wanbao published an apology on its printed newspaper to Nicole Seah saying that the newspaper is sorry for not stating the marital status of the man clearly, and causing inconvenience to both Nicole Seah and Steven Goh.

“I will let the matter rest from here on. This has been an absolutely unnecessary distraction from the issues that really matter in Singapore.”

‘No change’ on Olympics, Japan says after US virus travel warning