Mistaken identity by the online community

Earlier last week, local website, STOMP outdid itself by posting a photo of a National Service man drinking in the MRT carriage with a caption saying:

“We all understand that drinking and eating are not allowed on the train and the stations, right?  … It’s not nice to see NS guys breaking the rules while in uniform.” (link)

What followed the post was a barrage of comments criticising the STOMPer for the post and questioning STOMP’s decision for allowing such a post to be posted.

While some stopped there at the STOMP’s page itself for the angry comments, one Facebook fanpage, “Say “No” to an overpopulated Singapore“, posted a screenshot of the STOMP’s post and attached an image of a person by the name of Min Thet Naing with it.

This is a pretty poor attempt to label that as online CSI as anyone with an Internet browser could have search the moniker through Google search.

And if people from the online community had spent time looking through the comments in STOMP, they would have seen this post: 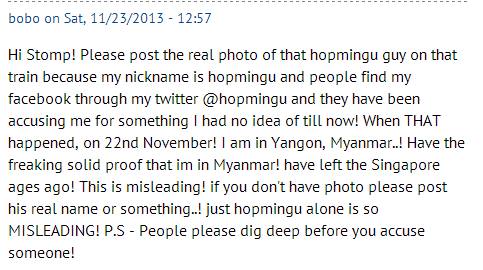 Min Thet Naing, the person whom the fanpage has identified as the STOMPer went to post a comment on the photo and this was picked up by a few people, and it was up-voted by netizens to appear at the top of the comment thread, prompting the fanpage to delete the image.

TOC understands from him that he has been away from Singapore for a long time. He does not have the document to prove that he left Singapore earlier because he had his passport changed when he received his new passport.

He sent us an image of his passport to show that he is using a new passport issued in Myanmar and has not used the passport ever since. 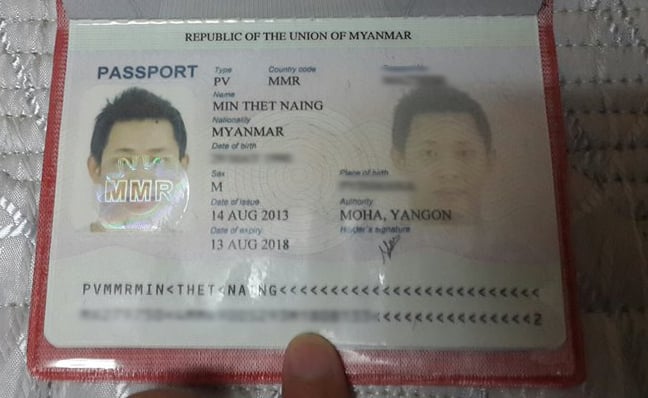 So is the saga over for this poor chap then?

Local social political website, The Real Singapore ripped the details from the initial post from the fanpage and went ahead to post an article entitled,  “Exposed: Guy who ‘stomped’ photo of NSF drinking water on MRT is a FT”

Min Thet Naing again had to write to state his innocence and The Real Singapore has since apologized to Min Thet Naing in an email,

However, the link is still online with no clarifications by Min Thet Naing.

To Min Thet Naing, he just hopes that this saga is over for him and that people will stop blaming him for something that he did not commit.