In 1984, Japanese musician Kitaro canceled his two sold-out shows in Singapore one day before the scheduled date. Defying Singapore immigration’s order to chop off his tresses as a condition for entering the country, Kitaro coolly hopped on the next flight back to Narita with his entourage of band and crew in tow.

…when I went through immigration, they were like, Kitaro, please come over here, you have a problem. You cannot enter with long hair. They said, “If you would like to enter Singapore, you will have to cut your hair.” I said, “I don’t want to cut my hair, so I would like to cancel the concert.”

Kitaro was not the only casualty of our government’s revulsion at long-haired males. Back in the 1970s, Cliff Richard, Robert Plant and others also suffered the indignity of being turned away at the Singapore immigration.

Ludicrous as it may sound, this insane policy was enforced from the 1970s because our holier-than-thou government had equated long-haired males with gangsters and morally depraved persons who had succumbed to the undesirable influence of the western hippie culture.

An Anglo-Chinese school spokesperson was convinced that long hair would transform our youth into hippies. The then Permanent Secretary of the Education Ministry was reported as saying, “It is in the national interest for our youth to have short hair.” (“Bringing back the ‘botak’ look,” ST, 29 July 1970).

Perhaps taking inspiration from China’s ongoing Cultural Revolution, the Singapore government actually launched a campaign in May 1973 to coerce and humiliate men into keeping their hair short (“The long-haired may get the sack,” ST, 8 Oct 1974).

Under this “snip snip drive,” if you were a citizen and a man sporting long hair, you would be served last at all government offices (see image below), refused entry into institutions such as schools and fire stations, and would have a hard time getting employed. 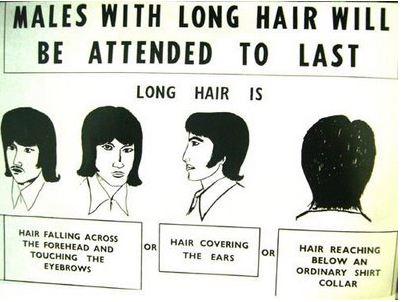 In his 1994 interview with Fareed Zakaria, Lee Kuan Yew averred, “Certain basics about human nature do not change. Man needs a certain moral sense of right and wrong.”

Our leaders’ principles and righteousness, however, did not even outlast Kitaro’s signature tresses.

In the 2000s, Kitaro, long mane and all, triumphantly returned to Singapore to hold his concert. He was again accosted by our immigration officers, this time not for his hair but for his autograph.

In 2004, exactly two decades after Kitaro’s run-in with Singapore immigration officers, the ruling party pressed ahead with seeking casino proposals from potential investors despite strong opposition from civil society (see here and here).

In 2010, this was what Lee Kuan Yew said to justify the government’s decision to hold F1 in Singapore and to build two casinos,

We always re-examine old policies and positions, and changed them with changing world circumstances. For example, we were against F1 for many decades because we were a crowded city; and having cars racing around would encourage people to race along our roads. But recognising that F1 has a jet-set following, and could generate economic spin-offs for our people, we decided to allow F1…

Similarly, we were against casinos for decades and refused offers of seedy casinos from Macau. But seeing the casino industry has developed in Las Vegas, a city in a desert, and their casinos have activities like big convention centres, live performances with successful Broadway hits, food and beverages with famous chefs, we have allowed two integrated resorts.

So much for all that highfalutin talk on unchanging moral values.

On the government’s recent decision to block access to the Ashley Madison website, Communications and Information Minister Yaacob Ibrahim said,

It was very clear that they want to set up shop here and promote things which we think run counter to our values.

And so we decided that (we had) better not wait for them to set up and just tell them they are not welcome here, because we need to safeguard our family values.

If you believe this is a move by the government to uphold our moral and family values, you are grossly mistaken.

As some astute netizens had pointed out, it all boils down to economics.

Unlike the gambling industry that has more deleterious effects on families and our society but contributes more than 3% to our GDP, there is no government revenue to be collected from the extra-marital dating site.

Ostensibly, the campaign was presented as a moral battle against the creeping influence of undesirable “western” culture. In truth, the young nation then needed its people to slog for its economic survival, and thus slovenly long-haired males, as a embodiment of the anti-materialism hippie lifestyle and values that would undermine productivity and retard Singapore’s economic development, had to be swiftly brought into line.

So do not be beguiled by the government’s rhetoric: what has always underpinned PAP’s policy is neither morals nor conservatism but GDPism. This has never changed from day one.

One thing has changed though: in the early days of nation building, economic growth had benefited most Singaporeans; today, it has degenerated into a pursuit to enrich a certain privileged class at the expense of ordinary Singaporeans.

The author blogs at http://singaporearmchaircritic.wordpress.com/