SMRT needs a technocrat to head its operations

The following is Kumaran Pillai’s speech delivered at TOC’s ‘Give up your seat‘. 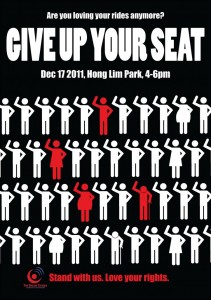 Who would have ever thought that the public transport would be the Achilles Heel of our present meritocratic government? Even George Cherian said, immediately after the May hustings that, the public transport woes could be fixed by a technocratic team and GE2011 has only awakened the sleeping giant and that our government would respond positively to the feedback from the ground. Unfortunately, matters have only become worse.

Their initial response was promising though; Tuck Yek was seen riding on the trains and buses which gained some positive response from the public. He was seen to be rolling up his sleeves and getting down and dirty. I used to wonder as to what a minister would be able to ascertain from these rides. In local lingo, it is called wayang, a show to appease the public, but, a show is only as good as its actors. And, I thought to myself that this actor was missing the plot altogether. The plot was simple, to have an efficient transport system to move the masses.

It is telling that there is no feedback system in place when the Minister has to resort to taking trains and buses to ascertain the robustness of our transport network. Perhaps, he should have also stayed in a train with the air-condition turned off for two hours just to find out how it feels and take a walk in the MRT tunnels as part of his field trip.

As for the recent breakdowns and the Ministry of Transport’s response is nothing less than pathetic. Lui wants to assemble a team of local and international experts to study the problem. Seriously, do we need to seek outside help after running the system for 20 years? This is yet another wayang exercise just to appease us. The proposed course of action, by itself, has opened up serious competency issues about SMRT’s management. It makes me wonder if they even have a handle on the situation. If so, why did the train(s) breakdown again this morning, Saturday 17th of December 2011?

This clearly shows that the current management team does not have its core competence in managing the train fleet and the infrastructure. In fact, what we seen in the last few years are the development of SMRT land and retails malls. I thought it was a great idea back then, that SMRT was maximising the land space in Singapore. But the key question in my mind today is whether if SMRT has lost its core competency in the management of the train network while it was developing new and alternative revenue streams in the retail space? Has the organisation lost its best engineers because of the management’s pre-occupation with building new revenue streams?

It is time for the Board of Directors to rationalise their business. The choice is obvious, SMRT is in the transport business and should focus its energies and resources solely on that. SMRT management should either spin off or manage the retail business by a subsidiary organisation or even consider divesting so that it does not take up any valuable time and resource from the management team.

While there are many people who call for the resignation of the CEO, the underlying reason should be to bring in a new head that will have a critical focus in ensuring that our transport network meets our basic transport needs. What SMRT needs now is a technocratic CEO with excellent operational experience to overcome the current crises.

Unfortunately, wayang and getting a team of experts may be just too late to deal with the breakdowns. What is need now is a swift and steadfast action.