Clinging to the Noose – Is Singapore getting left behind?

Unlike the “regular” death penalty, the mandatory death penalty means that the judges do not have any discretion in terms of sentencing. Once found guilty of the crime, the only sentence is death.

In 2007, the United Nations General Assembly voted in favour of a resolution calling for a global moratorium on the death penalty. Singapore and Malaysia were among the 54 countries that voted against the resolution. However, Malaysia appears to be having a change of heart.

Anti-death penalty campaigners in Malaysia have been working hard, and the case of Yong Vui Kong, a young Sabahan on death row in Singapore, has gained a lot of support throughout the country, prompting further debate and discussion of not just the mandatory death penalty, but the death penalty itself.

In May 2011 I attended a forum on drugs and the death penalty in Kuala Lumpur, where it was announced that six NGOs had come together to form a coalition against the death penalty in Malaysia. They were supported by the Malaysian Bar council, as well as certain Members of Parliament (MPs).

Back in August 2010, Malaysia’s de-facto Law Minister Datuk Seri Nazri Abdul Aziz was reported by The Star as saying that it was time for Malaysia to abolish the death penalty.

On 28 June 2011, The Star published the article ‘Agreed – resolution over death penalty’, reporting that there had been a roundtable discussion in Parliament.

(NOTE: Mr Gobind Singh Deo is also the lawyer of Singapore single mother Noor Atiqah M. Lasim, who is currently on death row in Malaysia after being convicted of drug trafficking. She has two more rounds of appeals to go.)

After discussion, the roundtable issued a statement calling for an immediate moratorium on the mandatory death penalty, as well as a review of the death penalty by a Parliamentary caucus “consisting of NGOs, former judges, lawyers and other stakeholders”.

Significantly, the statement from the roundtable said that there was no evidence that the death penalty was an especially effective method of reducing crime, saying,

Hopefully, a motion on the death penalty will be tabled in Malaysian Parliament soon, and the resolution of the roundtable will be adopted. 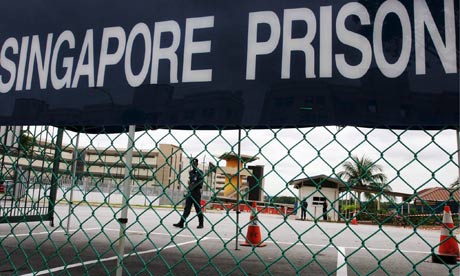 Reading such encouraging news from our neighbour, I can only sigh at the situation in Singapore with regards to the death penalty. As reports indicate a global trend moving away from the use of capital punishment, we stubbornly remain exactly where we are.

Singapore’s government has vehemently defended our use of the death penalty, saying that it is necessary as a deterrence to keep Singapore’s streets clean and the people safe.

As far as I have seen, however, there has been no justification given by the government on why the death penalty for drugs has to be mandatory, thus removing the judges’ powers in sentencing.

In April 2011, Ms Chong Wan Yieng, Press Secretary to Singapore’s Law Minister K Shanmugam, wrote a letter in response to a piece in The New York Times on the lawsuit against author of Once A Jolly Hangman Alan Shadrake. In the letter, she asserted that the death penalty was “openly and vigorously debated in Singapore”.

Unless Ms Chong was referring to the handful of anti-death penalty activists in Singapore, she is inaccurate in claiming that there is an “open and vigorous” debate in Singapore on the death penalty. A large segment of the population still do not understand the implications of a mandatory death penalty, nor do they realise that the Misuse of Drugs Act largely functions of presumption clauses that creates a “guilty until proven innocent” scenario. The issue of capital punishment is very rarely raised in Parliament, and indeed, we don’t know if Singapore will ever have a roundtable discussion on the death penalty like the one Malaysia has just had.

Anti-death penalty campaigns the world over and often repeated the following points: that there is no evidence to prove that capital punishment works as a deterrence, that it is wrong to take a life, and that the irreversible nature of the death penalty demands guarantees that no human system can give.

Which leads us to the question: why is Singapore still clinging to the noose?

Politics, the Law Society and us

One reason for the lack of any progress on this issue could be because we have allowed – or at least been seen to allow – the status quo to remain.

While Malaysia has had MPs such as Sabah MP Datuk Chua Soon Bui (who so fully supported the campaign to save Yong Vui Kong that she flew to Singapore to be with Yong’s family while they submitted clemency petition signatures to the Istana), Kelana Jaya MP Mr Loh Gwo Burne (who spoke at a press conference calling for a re-trial for Cheong Chun Yin) and Mr Gobind Singh Deo who have come forward to question the use of the death penalty in their country, Singapore has not seen any political figures stepping up in such a way.

Although alternative parties such as the Workers’ Party, Singapore Democratic Party and the Reform Party have included the abolishment of either the mandatory death penalty or the death penalty itself in their manifesto, the issue is not often brought up as it is generally seen to be a “vote loser”.

Singapore’s Law Society, too, is largely silent on the issue, unlike the Malaysian Bar Council, which actively organizes or participates in press conferences, forums and other events to highlight the death penalty issue.

Civil society in Singapore has also been struggling to push the death penalty to the fore, or to stimulate any public discussion on the issue. It is not easy for a story on the death penalty to be featured in the mainstream media, and efforts to raise the subject in the public domain are therefore made more difficult.

To make matters worse, civil society groups are often also unable to agree on their stances in relation to the issue – some groups want only the abolishment of the mandatory aspect of the death penalty, whereas others seek a complete abolishment of the death penalty. These differences in view, although unavoidable, contribute towards the confusion of an already confused public.

A long way ahead

While the recent developments in Malaysia indicate that our neighbour might be surging ahead of us towards joining the global move away from capital punishment, the campaign against the mandatory death penalty in Singapore remains an uphill battle.

But activists like myself refuse to give up. Welcoming the first steps that Malaysia has taken towards reviewing the death penalty, we continue with our campaign in Singapore and hope that one day we, too, will be able to join the increasing number of countries around the world who are turning their backs on this draconian punishment.

Clinging to the Noose – Is Singapore getting left behind?